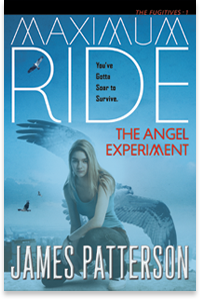 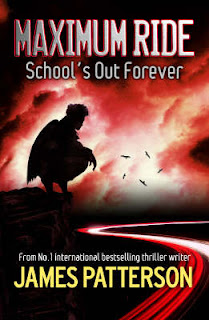 The Short and Sweet of It
Max is only fourteen years old, but she is responsible for five other children. Five children who, just like her, have wings. The result of genetic experimentation, these six kids are just trying to live as close to a normal life as possible.  The School that made them, a terrifying place of needles and tests and pain, wants them back, but is it to study them or to help them? Max is determined to keep her family safe, but is the School really the bad guy? And what is all this nonsense about Max saving the world?

A Bit of a Ramble
I needed this type of book, an easy to read young adult (really young) series that had no real purpose outside of pleasure. I have so many books sitting on the "You Have to Read This Soon" pile and quite a few others on the "No Seriously. You Need to Read This Now" pile that I was feeling a bit put out. I am a spontaneous reader, and sometimes the sight of ARCs and Tour Books makes me grimace.  There is something about having to read a book on deadline that annoys me - no matter how awesome the book sounds in the first place. I like to read what I want when I want. So for the past two days, I've ignored the 12 books I should be reading, and I read these two books.

The first in the series, The Angel Experiment, introduces us to the unique cast of characters. Max is the mom, the leader, a fourteen-year-old girl with too much responsibility but the strength to manage it. Fang seems to serve as the father, a fourteen-year-old boy who embodies the strong and silent type. Iggy, also 14, has a talent with fixing things and blowing things up despite the fact he is blind from an experiment at the School. The next in line is Nudge, an 11 year old, whose mouth is a rapid fire gun shooting out words. Gasman is an eight-year-old with a gastrointestinal annoyance. Finally, we have Angel, the youngest in the group at only 6 years old, who is also the most talented in regards to abilities. Not only can Angel fly like the rest of them, but she can also read minds.

Max lives with her family of six well away from the prying eyes of society. Despite her young years, she has been the leader of the family since the man who rescued them, Jeb, disappeared.  One day, the flock's world crashes down around them when Erasers (human-dog travesties who work as muscle for the School) come snatch Angel.  The other five children fly to rescue her, and that is where the adventure begins.

What I really enjoy about this series, outside of it being easy-to-read and just-for-fun, is the continuing questions.  When Max et. al. get to the School to rescue Angel, they are captured and forced back into the cages that were their homes for the early part of their lives. But they are also reunited with their father-figure,  the man who saved them from the School so long ago and whom they presumed dead, Jeb. And he tells Max that it's all a test, that everything that is happening is just part of the master plan, that he is just trying to help her, and that she, Maximum Ride, has to save the world.  From this revelation through to the end of the second book, readers are left wondering what is really happening. Is the School really the bad guy? I am really digging this lack of clarity; it's such a change from the norm, where the bad guy and his motivations are pretty apparent.

On the other side of the reader coin, there is something I'm not loving about the series. For me, it's like this was one really, really long book that the author just chopped up. I tend to think of series like a staircase.  Some series are staircases with landings, and each book is a section leading up to a landing; then you pause for a moment, turn the corner, and start up the next section by reading the next book.  Other series are staircases without landings, just a string of steps leading to the top. In the first style, each book is like a mini-episode in the overarching storyline; while it progresses the story as a whole, it has its own conflict-climax-resolution set up.  In the second style, not much happens in each individual book; it's more like the author wrote one big story and then just cut it into smaller pieces.  I much prefer the first style, and Maximum Ride is definitely the second, not much progress is made in each installment.

My final recommendation is to read it IF you like young adult (think 13 not 17) adventure stories that focus more on action than romance. As far as I can tell, there are currently six books in this series with the possibility of more on the way. I thought it was a trilogy until two seconds ago when I looked at Patterson's website. DANG IT! I was hoping it would be a nicely contained trilogy.


The Filmic Connection
The film is in the works...sort of.  Rumor has it that Catherine Hardwick (Twilight, Lords of Dogtown) will be directing and that she wants Robert Pattinson and Kristen Stewart in the lead roles. How in the world would those two be able to play 14-year-olds first of all? And can they even do non-romantic acting? It looks like we have a while before we find out as the film is currently slated for 2013. 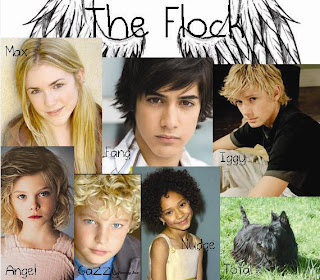 The image is a random person's casting of the movie. I'm not up on child actors, so I know nothing about who these people are or if they are at all talented, but I think they look appropriate. Much, much better than Pattinson and Stewart anyway.

For these Books Around the Web, head on over to the Book Blogs Search Engine!
Posted by Trisha at 5:50 AM