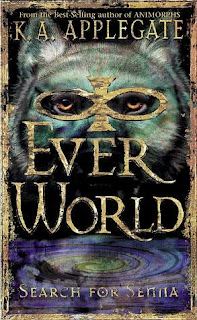 The Short and Sweet of It
David, Jalil, Christopher, and April are normal kids, but Senna (girlfriend, friend, ex-girlfriend, and sister, respectively) is not, and when Senna is suddenly swallowed by a wolf too large to exist and the whole world starts turning itself inside out, they are caught up in the struggles of a world (a universe?) very different from their own. Despite my wishing for a bit more depth, this is a fast, one-sitting type read, and I am really looking forward to reading the rest of the series.

A Bit of a Ramble
Vikings, Aztecs, gods, witches, and children stuck in the middle of all it.  That's my kind of fun.  I found this randomly on SwapTree and thought 'why not?' Why not, indeed.  I have already requested the next four books in the series from BookMooch, and I'm hoping the lovely gentleman in Australia will be willing to send them to the US.  My only complaint is that the book was too short, the characters, world, and plot a bit too undeveloped; however, I'm hopeful that the rest of the series will correct this problem, and then I can just look at it like one big book.

First, the main reason I enjoy books like this:


I'd lived sixteen years' worth of shiny malls and dark school hallways and narrow homes and TV blaring and smiley face e-mail and don't do drugs, don't do sex, don't smoke, don't eat junk food, don't don't don't because your boring, boring life, your robot march from kindergarten to grammar school to junior high to high school to college to work to the condo in Florida to the grave where you'll slowly decay for all eternity, should be nothing but leafy green vegetables and happy thoughts and G-rated lyrics about puppy love.

How many people - whether kids, teens, or adults - have felt this way?  Or maybe it's just me, and I should be worried? Regardless, this expectancy and predictability of reality, the tedium of it, can be wearing on a person, and it is through fantasy books that I escape...well, books in general, but really for true escapism, I need a fantasy novel.  And I love the mix with the real that Applegate has chosen.

The premise of the world created is that the gods left our world for this new one and brought (some of) their followers with them, so readers are introduced to various cultures' mythologies, and we also get to meet the followers themselves.  In this book, the focus is on the Vikings, with Loki and Odin.  As I said before, I do wish the book was longer.  I would have really enjoyed more time with the Vikings, more depth to their culture, but what I did get to see was enough to really spark my interest.

I feel the same way about the characters: David, Jalil, Christopher, and April are quite superficially drawn in this first book, given enough personality to interest me, but not enough to make me truly care about them or understand them.  Much of what I know about them comes from Applegate telling me about the characters rather than from me deducing personality from the way they reacted to situations.  David, being the primary character in this installment, is of course a bit more fleshed out, and the most intriguing part of his personality is that he seems to prefer Ever World with all the danger and excitement to "reality".  I liked this a lot for some reason; I guess I'm too used to the "reluctant hero" who just wishes he could stay home and be normal but must power through somehow for the good of the world.  David finds this adventure exciting, and he jumps in with both feet running.

I believe there are twelve books in this series which is both exciting and intimidating; although these books are pretty short, so it shouldn't take me too long to read them.  Acquiring them, on the other hand, is going to be somewhat of a problem since I'm on a pretty strict book buying ban.  Let's hope BookMooch and SwapTree can really pull through for me. :)


Question:  Has anyone out there read this series?