Book Review: The Boy Who Harnessed the Wind 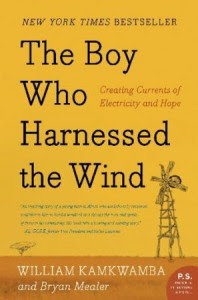 The Short and Sweet of It
William Kamkwamba of Malawi had an affinity and knack for science from a very young age. After a famine causes widespread starvation and financial disaster, William can not afford to go to school, so he starts self-teaching at the local library. When he finds a book on windmills, he determines to build one himself - using nothing more than his own ingenuity, a library textbook, and garbage found in the junkyard.

When people write about memoirs like this, reviews tend to focus on the person and what he/she accomplished more than on the telling of it: what he did is so amazing/inspiring/admirable/etc., the barriers she had to overcome were herculean, and so on and so forth. Let's get this part of the way: Kamkwamba is one awesome dude. The man created electricity out of trash he found lying around, he was entirely self-taught from library books, and he accomplished this amazing feat in a place most people couldn't survive. He is remarkable.  Now on to the book itself.

The first half of the book sets the stage for the creation of Kamkwamba's windmill.  In this section, readers are given access to life in Malawi, in particular a detailed accounting of one season's famine in which many people died of starvation and all suffered.  I understand why this was done: it laid the foundation for the necessity of the windmill, the desperate circumstances in which Kamkwamba's family and the entire town lived; however, I found myself wishing I could just get to the windmill story, feeling I didn't need any more details to show me the harsh conditions of living in Africa.  I seem to be alone in this feeling as many reviewers have said that they really enjoyed the day-to-day details included in the forward section. I think that while the backdrop is interesting, it's not what I was expecting with this book. 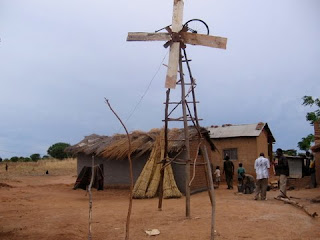 Kamkwamba's first windmill outside his home
The section about the building of the windmill is pretty science heavy, but the details of construction are interspersed with what, to me, were the most moving portions. Kamkwamba may have been the brains of the operation, but he would not have succeeded without his two friends, Gilbert and Geoffrey. The idea of one genius boy building a windmill is heartwarming, but for some reason, the fact that his two friends - the only two people in the village who weren't actively insulting William and calling him crazy - actually helped build the windmill really hit my happy center. Envisioning three young boys running around a junkyard for parts, working together on this monstrous project, really captured my imagination.

The final section of the book quickly recounts Kamkwamba's life after people outside the village heard about his windmill. Obviously and deservedly, he received a lot of international attention, and through the aid of various people and organizations, he was able to go to good schools and continue his entrepreneurial inventions.  This section just felt jumbled to me, no real depth to his experiences outside of his home village. And I just get annoyed when he's in America for the first time, and everything is all "the white man is so spectacular with his shiny things".

The writing took some getting used to for me. I'm thinking Kamkwamba and Mealer were going for authenticity: English as a second language style sentence structure, sentence length, and word choice. I get the reasoning, but I felt like this construction coupled with the piecemeal-ish writing detracted from my reading experience. I am most definitely in the minority here as I would hazard a guess that 99% of the reviews I've read have said that this is a great read and comes highly recommended. Perhaps it just wasn't my cup of tea. 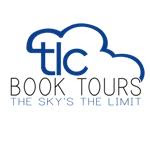 Big Thank You to TLC Book Tours for offering me the chance to read and review this book. For more information on this tour, including other blog stops, head on over to the dedicated page at TLC Book Tours.
Posted by Trisha at 4:33 AM