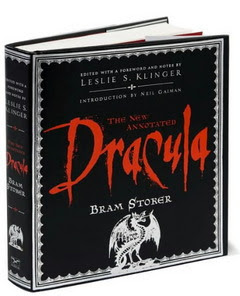 The Short and Sweet of It
We have a couple things going on here: first, we have Bram Stoker's Dracula, the vampire tale to kick all other vampire tale's pointy teeth.  Second, we have Leslie S. Klinger's amazing annotations of the text which add a wonderful depth to the narrative.  Third, we have Neil Gaiman, a man I would leave my husband for, introducing the text.  Finally, we have Appendices which have my geek heart pounding.

A Bit of a Ramble
I can not tell you  how much I enjoyed reading this. The story of Dracula itself is entertaining, thought-provoking, beautifully Victorian, and compelling; but to read the story with a scholar's notes at your side - a scholar who chooses to believe it is a true story - is absolutely fantastic. My husband, of course, thinks I'm crazy for liking the numerous disruptions to the story, but what can I say? I'm a complete geek, and reading this was like taking a short college course on the novel. If I were to write everything I wanted to say, discuss the myriad issues presented, this would be the longest post ever. Instead I thought I would give you my quick stream-of-consciousness, brainstormy list of things I would love to include in the post:

the use of multi-narrator journals, Mina as Ideal Woman and her simultaneous strength and submission, inconsistencies in vampiric lore within the text, Van Helsing is something of a douchebag, the correlation between vampiric bloodsucking and sex is not as apparent as modern interpretations of the story and the copious permutations suggest, not much happens but the slow pace is oddly poetic and intriguing, for a first reading the annotations would be distracting but for a second reading they add so much depth, the annotations are in turn historically enlightening, explanatory, and hilarious, I wish Sookie Stackhouse had been part of the Dracula Family Tree section, the role of men in the story is just as rigid and limiting as the role of women in Victorian ideology, the Vlad the Impaler-Dracula tenuous connection, the Sherlock Holmes-Dracula connection, the homoeroticism within the text feels more prevalent than the heterosexual, social class representations within the text,

Clearly, there is much food for thought within the text; but since I can't really focus on all of it, I thought I would stick to just telling you to READ THIS AS SOON AS POSSIBLE, especially if you've already read Dracula. The annotations, introduction, and appendices are unbelievably informative and delightful to read.


The Filmic Connection
The story of Dracula has been visualized over and over again in films, not only reproductions and permutations of Stoker's story, but also the bastard children of Dracula (i.e. all vampire films ever). DVD in My Pants gives a list of 13 Dracula films you need to see that I really agree with, so I'm going to send you over there for more information. I would like to add Dracula: Dead and Loving It, a Mel Brooks film, to the list though. It's just funny. 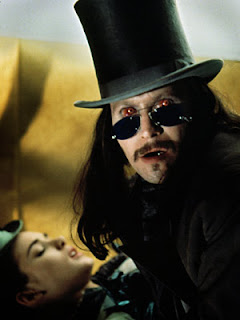 I decided to watch Bram Stoker's Dracula, a 1992 film directed by Francis Ford Coppola.  Starring Gary Oldman (Dracula), Winona Ryder (Mina), Anthony Hopkins (Van Helsing), Keanu Reeves (Harker), Cary Elwes (Holmwood), and Tom Waits (Renfield), this film really busted out a serious cast. I know I've seen the film before, probably when it first came out, but as I was 12 in 1992, I definitely didn't remember it fully. Just for fun, my comments for the film are going to be all brainstormy too:

1992 and 2010 are very different eras in fantasy film-making, breasts, Winona Ryder is kind of annoying, why do people need their bad guys to be bad because of a girl, bouncing breasts, wow that is blatantly sexual, where did all that blood come from, someone should do a Dracula steampunk film, Gary Oldman is so strangely sexy, nipple, another nipple, why are Mina and Lucy kissing, things are revealed much to quickly here, objectively close to the book but subjectively quite different, arrggg...it lost it's Victorian-ness, BOOBIES, what is she doing to that wolf's ear? holy mary, really great performances, visually stunning for its time,

Okay then, did I mention that there are buoyant bouncing boobies liberally sprinkled throughout this film?

On a Side Note
I have Syrie James' Dracula, My Love: The Secret Journals of Mina Harker on my next to read pile as well as Konstantinos' Vampires: The Occult Truth. I'm in vampire mode for some reason.

Question: What Dracula books or films do you really like?
Posted by Trisha at 5:20 AM