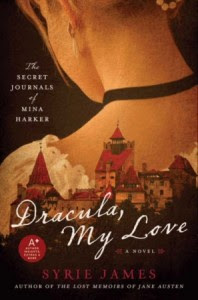 The Short and Sweet of It
The story of Dracula retold from Mina Harker's perspective, Dracula, My Love refits the tale within the framework of a love story where Mina is painfully positioned between two men - Jonathan and Dracula - and forced to try and protect each. The story was as riveting as the original.

A Bit of a Ramble
Events coalesced perfectly for me regarding this book. I had just read that Neil Gaiman wrote the introduction for The New Annotated Dracula, and since I love him and the story, I was craving the book. I resisted due to my book buying ban, but then I was offered Dracula, My Love for review, and I realized that Fate was knocking at my door.  In my review of The New Annotated Dracula, I mention that Leslie S. Klinger, the editor, went about annotating with the perspective that the story was true, that the characters did in fact keep these journals, and Stoker merely collected them into a chronological narrative. I adored this, and I went in to Dracula, My Love with the same perspective.

When Bram Stoker compiled the journals necessary to tell the tale of Dracula, he didn't know that Mina Harker had heavily censored her journals in order to protect herself and both of the men she loved. Now, Mina recounts the events of that desperate time, revealing the truth about her love for both Jonathan and Dracula and about the true nature of a being far different from the vicious killer he was thought to be.

The Jonathan-Mina-Dracula love triangle was fantastic. Throughout the story, Mina's feelings for the two men in her life were consistent. She loved them both, differently but equally, and I really appreciated this set up. Many times in a story like this one, the woman is not choosing between two men she loves; instead, she is choosing between her true, passionate love and a man whom she doesn't love but who can provide stability. That set up annoys me to no end, and I thought that her deep feelings for each man added a greater weight to the events in the narrative.

I was most impressed by how authentic the story felt. James has managed to stay true to the original plot of Dracula while simultaneously correcting some of the inconsistencies, contradictions, and unanswered questions from the original text (of which there are many). I had no problem whatsoever integrating this  narrative into my larger meta-narrative of Dracula.

If I have one complaint, it is the ending. Like in the original Dracula, the end is much too abrupt for me, what would be "The Big Fight Scene" in a modern story is merely a few paragraphs in both Dracula tales. Plus, the end-end with Dracula and Mina and Jonathan and the strange character turnabout and the.....okay, I'm just not even going to try as I don't want to spoil anything.

Overall, I am very happy that I spent the month of August immersed in the world of Dracula by reading the original, watching an adaptation, and reading this novel. I think I may need a Dracula break now...or I could just jump right in to Konstantinos' Vampyre: The Occult Truth.  We'll see.

Question: What is the proper term for a book like this? Spin-off? Retelling? Adaptation? I'm not sure if I'm just currently blanking or if there are too many possibilities or if I'm an idiot and this is one of those momentary lapses like when you suddenly forget how to spell "what".
Posted by Trisha at 5:05 AM