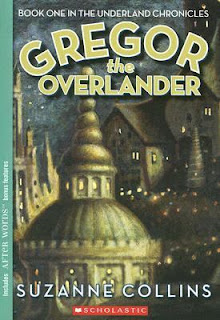 The Short and Sweet of It
Gregor's life changes when he slips down the rabbit hole. Or rather the air vent in the laundry room. Soon he finds himself in a world he never knew existed, thriving below his own, with royalty, talking animals, inter-species conflicts, and prophecies. The reader is treated to a wonderful adventure in a unique and well crafted world.

A Bit of a Ramble
My first bout reading Collins' Overlander series was almost exactly two years ago when I read the first four books in one day - Labor Day. Back in 2008, eclectic/eccentric was a much different blog, and so I didn't actually review the books individually or as a series. When I needed a break from Mary Roach's snarky wit (which I adore) in Packing for Mars, I decided to start re-reading this series. I adored it the first time around, and I was determined to read the books more carefully, taking time with them. One hour later, I've finished the first book. So much for slow and steady.

In the first installment, readers are introduced to the Underland, an entire civilization with people, rats, cockroaches, spiders, bats, and other creatures. As with any collection of large populations, there are fights, and in the Underland, the two big combatants are the humans and the rats. A prophecy has long foretold of an Overland warrior who will be instrumental in ensuring the humans are not exterminated by the rats, and when Gregor comes to the human city of Regalia, it quickly becomes apparent - to everyone but Gregor - that he is the subject of the prophecy. And so begins a daring adventure with a unique cast of characters.

I love so much about this book. The world is well-constructed, detailed but not overbearing. The plot moves along at a perfect pace for a YA-middle grade adventure novel. Collins' has an artful way with words that really draws me in to the story, and I really appreciate the humor she intersperses throughout. Ultimately though, it is the characters that really stand out to me.

Gregor follows many of the same characteristics as the typical reluctant hero; however, his reluctance doesn't come off as angelic humility, but rather very human modesty.  Accompanying him is his sister, Boots, a precocious two-year-old that immediately captured my heart and tickled my funny bone. She is wonderfully open and accepting in the way of two-year-olds, and has no compunction about reminding Gregor, great warrior that he is, that he still needs to take time out from saving the world to change her diaper. Love it.

The Underlanders that join Gregor and Boots on their adventure are just as intriguing. Luxa is the heir-apparent to the thrown, just years away from taking the crown as Queen of the humans in the Underland. Henry, Vikus, Ares, Aurora, (two humans and two bats), Tick and Temp (cockroaches who worship Boots), seriously the list goes on and on with interesting characters culminating in Ripred, a battle-hardened and skilled rat who is siding with the humans in an attempt to overthrow the current Rat King and bring peace to the warring nations.

Even though I told myself I would read the series through at a much slower pace than the first time, I am right now fighting the urge to pick up the second book in the series and dive right in, plowing through in one day just like I did the first time around.  If you enjoy action-packed, entertaining, and well written adventure stories for younger adults/older kids, you should definitely pick up this series!


Memorable Quote:  ...for a second Gregor succeeded in thinking of himself as a warrior. A bold, brave, powerful warrior that the Underlanders would tell stories about for centuries. He could almost see himself leading a squadron of bats into battle, stunning the rats, saving the Underland from -

And there he stood, a boy in a goofy hard hat with a beat-up flashlight and a bunch of batteries he hadn't even tested to see if they still had juice.

The mighty warrior excused himself and changed a diaper.


The Filmic Connection
I wish.