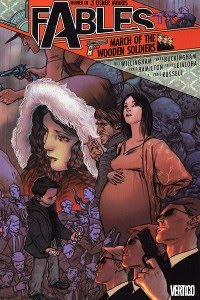 The Short and Sweet of It
As with Legends in Exile, Animal Farm and Storybook Love, March of the Wooden Soldiers recounts the adventures of fairy tale myths and legends living out their days in New York. Forced to leave their homelands after a powerful Adversary went all Dark Side on them, they have carved out their own space in our world. But now the Adversary is making a move against them, and everyone in Fabletown and on the Farm must fight to protect what they have built.

A Bit of a Ramble
March of the Wooden Soldiers is one long, chronological story with a short flashback tale in the very beginning. The Last Castle starts off the novel with Boy Blue recalling for Snow White the horrific battle at the last open gate between the worlds. In Fairyland, a heroic battalion comprised of many disparate peoples holds the castle, the last open gate to the new world, in the hopes that more can escape. This tale becomes significant when a refugee - the first in centuries - arrives in Fabletown. Claiming she escaped the Adversary, this woman's arrival coincides with the coming of soldiers intent on taking back all magical items. Did she lead them to Fabletown in her escape? Or is there something more sinister afoot?

I probably haven't done the story justice, but I wanted to give you a taste of the type of story being told in this wonderful series without actually giving anything away. As I said in my last Fables review, summarizing the plot is a complicated task as Willingham carefully crafts an entire world within his stories, a world which has multiple characters, locations, events, intentions, and functions. That being said, I want to assure future readers that in this instance, complexity does not equal confusion. The multiple plot lines are artfully woven together to form a cohesive whole.

Unfortunately, I have no more Fables waiting on my shelves to be read, and since I'm really trying to not buy new books, it may be some time before I get to volume 6. I've only bought one book since BEA/BBC way back in May, so I may be able to convince myself to splurge, but then what do I get? Fables or Hunger Games? A tough decision.

Memorable Quote: It is my fondest desire to bust a host of caps into multitudes of fleshy personages. Isn't that just hilarious?

Memorable Scene: Before the war begins, the wooden soldiers, all in black suits with glasses and helmetish haircuts, looking like the Men in Black, march down the road. A family of three looks out the window, making guesses as to who these people are:


"It finally happened," the father says. "It's the Young Republicans! They're marching in - taking over New York!"

"Just like when they marched on Paris in '39," the mother replies.

The young son questions here: "Weren't those the Nazis?"

"Is there a difference?" the mother answers.

I was laughing so hard I could have peed my pants.