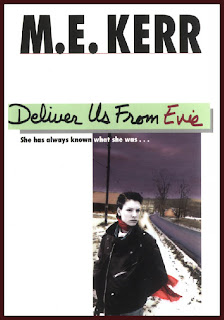 The Short and Sweet of It
Parr's fifteen years old but he knows a few things. One, he doesn't want to be a farmer like his brother Doug and sister Evie. Two, he likes Angel Kidder. Three, his sister is a lesbian. Told from Parr's point of view, the story reveals all three of the Burrman kids' love lives: Doug and his slightly uppity girlfriend, Evie and her rebellious girlfriend, and Parr and his religious girlfriend. Evie's journey is at the heart of the story even as we - for obvious reasons - get more details about Parr's.

The Sex of It aka Why It's Banned
No surprise here, the primary reason your typical book banner would get in a huff over this one is homosexuality.  Issues of homosexuality are directly addressed time and again throughout the story. Evie's mother berates her for not dressing more feminine, espousing the theory that if Evie is going to be gay, she should at least try to hide it. Evie replies the only way she can:

Cord, who has a crush on Evie, succumbs to the "lesbians just haven't met the right man" theory, and has this wonderful tidbit to offer:


"Do you think being a dyke is sinful?" [Parr] asked him.

"Hell no! It's not serious enough to be a sin. It's kid stuff. Two women is...Now two men - that's another matter. That's sin in the Bible."

The book is full of little scenarios like this, lines and actions and thoughts that remind readers of the stupid little falsities and generalities revolving around homosexuality. With this book, however, we have a two-for-one deal because not only would book banners get their grandma-style panties in a bunch over the homosexuality, but the 15 year old boy and his hymn-singing girlfriend get a bit frisky too:


Parr and Angel have just left a dance; once they get in the car together...

Angel was all over me, or I was all over her, or we were all over each other. We'd never really been off alone together, and we just let go.

"Didn't you ever hear boys get excited?"

"It doesn't show though."

Why that naughty girl....

Overall Recommendation
I found the juxtaposition of homosexuality and farming quite interesting. Kerr dispels common misconceptions about both groups. I found it rather refreshing that Kerr manages to raise the issues of each without harping on them in some soapboxy or melodramatic fashion. That being said, the book almost felt more about farming than it was about lesbianism. Telling the story from Parr's perspective seemed like a bit of a cop out; as if having Evie tell the story would have been too dramatic. Overall, I can't put my finger on exactly how I feel about this book (speaking of cop outs right?).

I think the wonderful Cass from Bonjour Cass! is putting up her review of this book today as well.

A Sexy Question: What's the sexiest kiss you've ever read about in a book?