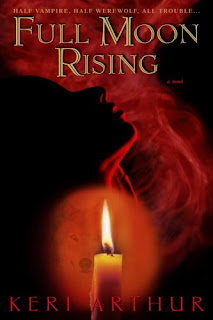 The Short and Sweet of It
Riley Jensen, half-werewolf half-vampire, works as a liaison for an organization designed to police the nonhuman part of society, but when her brother goes missing, Riley finds herself forced to take a more active role. And it just had to happen right before the full moon when the more basic urges of werewolves take over.

The Sex of It aka Why It's Banned
We're talking lots and lots of explicitly described, down and dirty sex. Book banners may actually have heart attacks and die if they read this one. Even I wouldn't suggest a younger person to read this.

While Riley's brother is gay, the sex remains hetero throughout, but we're not exactly talking about missionary-position, virginal wedding night type stuff here. Instead we have writhing, naked bodies pressed together on a dance floor and indiscriminate, unapologetic sex in public with multiple partners - whether simultaneously or one after the other.

The basic reasoning behind these activities is interesting: werewolves go into heat the week before the full moon and their lust is practically uncontrollable. Because of these natural urges, they have created an ideology of casual sex. It is their way, and they do not feel like they should apologize for it just because current human morality frowns upon such activities. I appreciate Arthur's logic here, and I applaud the premise that different cultures vary in morality and these variances should be respected.

Overall Recommendation
Obviously, there was a whole lot of sex in this story, but I have to admit that it left me a bit cold. I'm not sure why exactly, but while the author kept telling me how hot the sex was, I just wasn't feeling it. This is the first in a series of books, and I don't think I'll keep going. Harris, Roberts, and Lowell satisfy my need for sexy novels, and really I just have enough series to read that I don't need to spend time on ones I feel lukewarm about.

A Sexy Question: How old do you think a person has to be before he/she can reasonably read "romance" novels? And I mean that in the "throbbing member", Nora Roberts, Elizabeth Lowell, Jayne Ann Krentz, etc. sense not the Nicholas Sparks sense.