Book Review: Gregor and the Prophecy of Bane 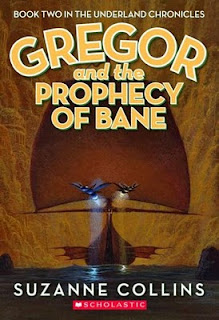 The Short and Sweet of It
Prophecy of Bane is the second book in the Underland Chronicles, one of my favorite middle grade series. In the first book, Gregor enters an underground society and fulfills his role as warrior in the first of a series of ancient prophecies. Now, the second prophecy is coming to pass, and once again Gregor must leave the (relative) safety of the Overworld, our world, for the much more violent, much more interesting world below.

A Bit of a Ramble
The primary conflict in the Underworld is between the rats and the humans, two societies of intelligent beings, each desiring power. The other creatures of the underworld - cockroaches and spiders and bats and more - generally speaking fall on one side or the other of the fight; although each society is valid and important in its own right. I love this set up. The individual societies are each given their own importance within the books, and Collins never makes taking a side too easy. While we definitely side with the humans, for obvious reasons, Collins give them faults and lets our sympathies lie primarily with Gregor, who while human, is more accepting and respectful of the other races.

The incorrect assumptions the humans in the Underworld make regarding their enemies come to the forefront in this book. The prophecy implies that a White Rat called the Bane is rising amongst the rats, and that Gregor must kill it or risk the rats taking over the Underworld. His quest-mates include Luxa, the young rebellious queen, and her bat Aurora, Ares, a bat he has bonded with, Twitchtip, a rat with a super sense of smell, and Gregor's two year old sister Boots who serves as both comic relief and child philosopher. Two other humans and their bats come as well.

The inclusion of Twitchtip begins Gregor's understanding of the rats. While we have already met Ripred, a rat with superior fighting and strategy skills who is willing to work with the humans to bring about peace, he is a bit too self-composed and arrogant for the reader's sympathies to come out too much.

In the first book, Gregor called attention to the arrogance of humans who believed they were more intelligent, better than, the more simplistic crawlers (cockroaches). Now Gregor is coming to understand that the rats, for all their faults, are not necessarily the "evil" Underland humans make them out to be. One section of the text highlights the difference between Gregor and the Underland humans:


Ripred's long tongue swept across his jaws, cleaning off the cream. "Nothing like that in the Dead Land. Nothing much of anything these days, of course. Since the humans have cut the gnawers off from their main fishing grounds."

"Perhaps a little hunger will help them reflect on their poor judgment in attacking us," Solovet said, helping herself to a large serving of mushrooms...

Gregor tried to imagine being a rat and being hungry. In his experience, being hungry didn't make you think about anything but getting food - or maybe, in the rats' case, getting even.

Gregor's ability to sympathize with Others, even those who fight against him, is just one of the things that makes me love this series, but my reviews of the other books will hit on the others.


This Book Around the Web
If I've missed your review, let me know!
Posted by Trisha at 5:28 AM