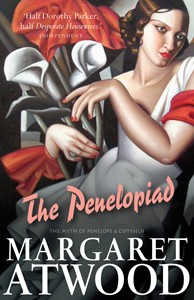 The Short and Sweet of It
In the epic The Odyssey, we hear the tales of the witty and daring Odysseus as he returns home to his wife after a war, fighting mythical beasts, being seduced by beautiful goddesses, and smartly outwitting his foes. Odysseus is a hero, a legend, a great man making his way home. Waiting for him back at the castle is his faithful wife who wishes for nothing more than his return. This is Penelope's story.

A Bit of a Ramble
The Penelopiad is the first of the Canongate Myths, a series of myths, fables, and folktales rewritten with a spin by contemporary authors. How beautiful is that idea? While the story is touted as a retelling of The Odyssey from Penelope's point of view, I find it to be so much more than that. After all, The Odyssey follows Odysseus who is nowhere near Penelope (geographically speaking), so The Penelopiad adds to the story rather than retells it.

Atwood focuses on issues of gender, particularly the variant rules and expectations of women depending on societal status. For example, when Penelope is talking about her upcoming marriage, she says:


"I know it isn't me they're after...it's only what comes with me - the royal connection, the pile of glittering junk. No man will ever kill himself for love of me. And no man ever did."

And while that may sound a bit self-deprecating, the lines that come after are what captured my heart:

"Not that I would have wanted to inspire those kinds of suicides. I was not a man-eater, I was not a Siren, I was not like cousin Helen who loved to make conquests just to show she could."

I think this passage stuck out to me because it was nice for a character to not want to be a Juliet or a Helen or a Cleopatra; some of us just want to be normal human beings, not adored female icons. Of course, the real point here is that Penelope is a strong female character, cognizant of her low status in a patriarchal society...
Back to the issue of class and gender: while Penelope narrates the majority of the book, interwoven through her story are the 12 maids offering their own perspective on the events leading up to their death. For those who've never read The Odyssey, in it are 12 servants of Penelope's who have sex with the suitors who have taken over Penelope's house in hopes of becoming lord of the manor. When Odysseus returns home, he kills the suitors and then he hangs the 12 servants as well for engaging in sex with the men. The servants make it clear in their narration that they had no choice in the matter, and the real reason Odysseus is upset with them is not that they had sex, but that they did so without his permission.
In one chapter a mock trial is taking place. At the time of the telling, all are dead, Penelope et. al. in Hades, so the stories from the maids interweave throughout time, with some characters and events featured in contemporary times such as this trial. In this chapter, the twelve maids have charged Odysseus with their murder. The attorneys and the judge are clearly from modern times. A section:

Penelope: I felt so sorry for them! But most maids got raped, sooner or later; a deplorable but common feature of palace life. It wasn't the fact of their being raped that told against them, in the mind of Odysseus. It's that they were raped without permission.
Judge (chuckles): Excuse me, Madam, but isn't that what rape is? Without permission?
Attorney for the Defence: Without permission of their master, Your Honour.
Judge: Oh. I see. But their master wasn't present. So, in effect, these maids were forced to sleep with the Suitors because if they'd resisted they would have been raped anyway, and much more unpleasantly?

Atwood spells out what all of us know but ignore while reading the ancient stories. We justify behavior based on "the time", accepting what happened then in way we (hopefully) would not now. But it was really nice to see a contemporary person hold an ancient legend accountable.
The construction of the novella is creative, the writing simultaneously simple and elegant, and the themes intriguing and relevant. I definitely recommend it. I would like to suggest reading The Odyssey first, however, as I'm not sure you can fully appreciate the story without being familiar with the original. Maybe reading the SparkNotes version would be enough (not something I would ever recommend). The story can definitely be understood and enjoyed without a foundation in the original, but you will get so much more out of it if you read Odysseus's story first. Plus, The Odyssey really is a great read.
And as a bonus, reading The Odyssey not only let's you appreciate this story, but it is also the basis of these riveting tales as well:

Of course, I have yet to read Ulysses....but O Brother Where Art Thou is one awesome movie!

Now that I have sparked your interest, I'm hoping you guys will join in the read-a-long of The Odyssey. Trish of Love, Laughter, Insanity, and Jill of Fizzy Thoughts, and I had the wonderful idea of reading The Odyssey together, and we want everyone to join in the fun! Head over to Trish's blog to sign up.