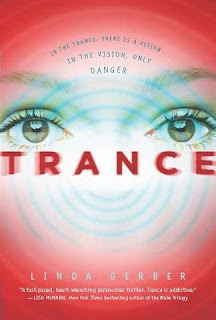 The Short and Sweet of It
Ashlyn and her sister Kyra have a gift: they have visions of the future. But when Ashlyn ignores a vision of Kyra's, their family is devastated by loss. Now it looks like it's all happening again, but who will be lost this time? And can the girls prevent the tragedy?

A Bit of a Ramble
Meh. That's about all I can say. I read the entire book in about an hour, and when I was done, nothing intelligent popped into my head. Just meh. The premise is interesting, but the execution is rather humdrum. Not much happens in the story, which seems primarily focused on Ashlyn's thoughts rather than actions. Everything in the story is stilted, cut off without development.

For example, Ashlyn's relationship with her father is practically non-existent since the accident. He is absent, out of town at work, most of the time, and even when he is home, he is locked in his office. I can understand the distance...sort of...but no real conflict between Ashlyn and her father begins and no resolution comes about either.

Then we have Ashlyn and Kyra's relationship with their parents, told through flashbacks. Apparently both parents, especially the mother, were ashamed of the girls' visions. This rather serious issue is touched upon from time to time, but again there is no real development of what could have been an emotional conflict.

Next, we have Kyra's absence throughout the majority of the book which removed what could have been a major plot opportunity for conflict and character growth. Honestly, I feel like the entire book could have been squashed into opening chapters, setting the stage for the primary story.

As always, what doesn't work for me could quite possibly work for you, so if you are interested in reading this book, leave your email in the comments section!