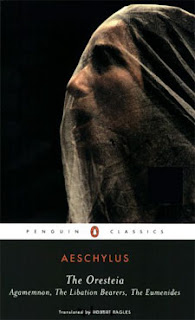 The first in the trilogy, Agamemnon, recounts the return of its titular character to his home following the Trojan War. The second, The Libation Bearers, has Orestes returning home and killing his mother, Clytemnestra, and her lover, Aegisthus. In the finale to the story, Orestes has fled his home, pursued by the three Furies who wish to torment him and drive him to death because of his matricide.

A Bit of a Ramble
As with the first play in this trilogy, I really enjoyed the story. While the second should have included the most exciting event, it fell flat, lots of talk with very little action. The third play, however, follows Orestes to Apollo's celestial (at least otherworldly) home and then on to Athena's city where Orestes appeals to the goddess to judge his case and hopefully free him from his persecution by the Furies. The trial is intriguing with the Furies on one side, and Apollo and Orestes on the other with Athena and some citizens judging the case. 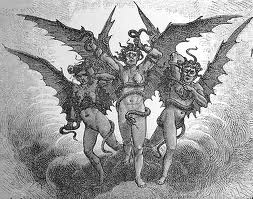 What was most interesting to me was the dialogue between the Furies and Athena. The Furies are old gods, subjugated by the Olympians, and primarily located in the Underworld. They consistently protest their lot and call attention to the fact that they came first and should not be thwarted. Athena doesn't lord it over them and instead offers them a place of honor in her city: a respectful way to placate them over their loss in the case. It's funny to me how much these plays stray from their central protagonist - Orestes - and feature such a philosophical discussion of the role of the old and new gods.

Another interesting point about the trial is the horridness of the closing arguments. The poor, mortal jury has to cast their ballots, but before doing so, they are dealt some pretty serious threats by the Furies and Apollo. Vote my way or I'll decimate your city sort of stuff. The vote ends up tied, but Athena casts her vote for Orestes' innocence.

Having finally finished the entire trilogy, I am confident in saying that I would recommend it to anyone interested in this time period - especially since it's pretty quick reading - but without the foundation interest, I would hazard a guess that modern readers wouldn't be all that excited by the story. 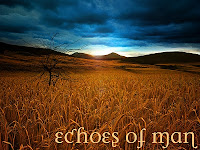 Echoes of Man Image from ~darkmatter257 at deviant art
Posted by Trisha at 12:56 PM