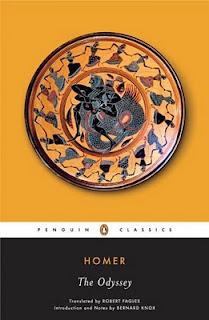 The Short and Sweet of It
The Odyssey picks up where The Iliad leaves off, and follows Odysseus as he tries to make his way back home to Ithaca, where his faithful wife fends off suitors and his young son is slowly becoming a man.

A Bit of a Ramble
I have read bits and pieces of The Odyssey over the years, but I've never read the entire epic poem. Now that I have, I am so very glad I did. While certain books were a bit slow and certain passages a bit redundant or unnecessary, overall Odysseus's journey home is a fascinating look at the culture, religion, and ideology of what is to me, an already fascinating time period.

As I read this as part of a readalong, my thoughts on specific sections of the book can be found in my first four posts (Books 1-6, 7-12, 13-18, and 19-24). In this review post, I really want to focus on one thing: the translation by Robert Fagles.

Many times, in my experience, when contemporaries translate ancient works, the resulting language feels formal, flowery, and/or a wee bit confounding, which turns off many of us lazy modern readers. Fagles' translation, on the other hand, reads smoothly and simply without losing that touch of class which graces older works.

Here are a few different translations of the first lines of The Odyssey:


Sing in me, Muse, and through me tell the story
of that man skilled in all ways of contending,
the wanderer, harried for years on end,
after he plundered the stronghold
on the proud height of Troy.
He saw the townlands
and learned the minds of many distant men,
and weathered many bitter nights and days
in his deep heart at sea, while he fought only
to save his life, to bring his shipmates home.
~~~~Robert Fitzgerald (1961)

Tell me, O Muse, of that ingenious hero who travelled far and wide after he sacked the famous town of Troy. Many cities did he visit, and many were the nations with whose manners and customs he was acquainted; moreover, he suffered much by the sea while trying to save his own life and bring his men safely home.
~~~~Walter James Miller (1970)

Muse make the man thy theme, for shrewdness famed
And genius versatile, who far and wide
A Wand'rer, after Ilium overthrown,
Discover'd various cities, and the mind
And manners learn'd of men, in lands remote.
He num'rous woes on Ocean toss'd, endured,
Anxious to save himself, and to conduct
His followers to their home.
~~~~William Cowper (1791)


And here, my friends, are the words of Robert Fagles:


Sing to me of the man, Muse, the man of twists and turns
driven time and again off course, once he had plundered
the hallowed heights of Troy.
Many cities of men he saw and learned their minds,
many pains he suffered, heartsick on the open sea,
fighting to save his life and bring his comrades home.

Personally, Fagles's translation knocks the others on their bottoms, so if you feel the urge to read this in the future, I would definitely suggest reading this translation.

Read an interview with Robert Fagles at PBS; things mean a lot;
Posted by Trisha at 5:17 AM