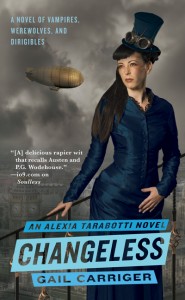 The Short and Sweet of It
Alexia Tarabotti, who captured my heart in the first novel Soulless, returns again, happily wed to Lord Maccon. Well, that is until he suddenly disappears, off to Scotland with nary a word. A missing husband isn't her only trouble, however, as she is quickly embroiled in a mystery involving exorcised ghosts, fangless vampires, and a regiment of werewolves newly arrived in London. She handles it with aplomb though, parasol in hand.

A Bit of a Ramble
I adored Soulless, the steampunk paranormal mystery romance novel was wonderful fun, and in my opinion, Changeless is just as good. Alexia is an intelligent, resourceful, strong female character who handles her rather aggressive and domineering husband, his wolf pack, and the mysteries of a supernatural world with wit and class. The character of Alexia is reason enough to read the series, but add in all of the other complex and entertaining characters, the supernatural bent, and the whole steampunk Gothic aura, and wowza!

A quick note on a few of the other characters: Felicity, Alexia's horribly shallow and annoying sister, who has to accompany Alexia on her mission to Scotland; Madame Lefoux, wonderfully described below, and just as impressive as Alexia herself; Ivy, Alexia's best friend, who has an obsessive fondness for ridiculously ugly hats; and let's not forget the dirigible and the parasol, each of which have their own uniqueness which classifies them as characters in my mind.

I did have one small problem with this book though. There's a misunderstanding at the end which feels completely wrong. While the issue is certainly weighty, the misunderstanding could have been easily rectified, and the use of it as a cliffhanger seems ridiculous. I am hoping that this HUGE ISSUE is quickly resolved in Blameless, so the series can go back to being perfectly wonderful.

Under the shade of the hat, she appeared to be of middling years, handsome but not pretty, with strong features and coarse thick hair, tending toward gray. She boasted the general battle-ax demeanor of an especially strict governess. This was the kind of woman who took her tea black, smoked cigars after midnight, played a mean game of cribbage, and kept a bevy of repulsive little dogs.

The woman shouldered a rifle with consummate skill and pointed it at Lord Maccon.

Question: How long does it take Book Depository to ship orders? I've been waiting for two and a half weeks now, and no sign of the book and no arrival date on the website. Ridiculous.