Book Review: Disturbed by Her Song 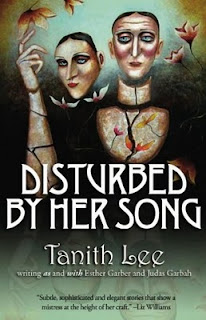 
Lee channels Esther and Judas Garber, siblings and writers, to create this collection of short stories. While the Garbers, along with their sister Anne, are Lee's own creations, she claims they are as real to her as anything, and so this collection reads as a mix of fiction and memoir. Each story, despite the finale, is written from a first person perspective by either Esther or Judas and recounts an event from his/her life. Typically this event is of the romantic or sexual variety; although it should be noted that this is not erotica. The sex bows down before the story, is a tool for the story, not the reason for its existence.

There are nine stories in this 200+ page collection ranging from tales with chapters to one-page portraits. Esther's stories are Black Eyed Susan, The Kiss, The X's are not Kisses, Death and the Maiden, and Disturbed by Her Song. Judas's stories are Ne Que V'on Desir, Alexandrians, Fleurs en Hiver, and The Crow. Despite the fact that all stories were indeed written by the same person, Esther and Judas have very different voices, the distinction obvious. Of course, the difference is also noted in that Esther is a lesbian and Judas a gay man.

The entire collection is book-ended by the tale of the Princess and the Nightingale, the story which also gave the collection its title:


Once upon a time there was a princess, outside whose high bedroom window a nightingale sang every night from a pomegranate tree. While the nightingale sang, the princess slept deeply and well, dreaming of wondrous and beautiful things. However there came a night when the nightingale, for reasons of her own, did not sing but flew far away.

In the morning, the princess summoned a gardener and told him to cut down the pomegranate tree. The man protested; the tree was a fine one, young, healthy and fruitful. But the princess would not relent. For as she said, all that one previous night a nightingale had perched in the branches, and the princess's sleep had been very much disturbed by her song.

This passage begins the book, but the significance is not revealed until the final tale, and it's overall import is moving and melancholy, ending the book on the same sort of poetic and dreamy tone which has permeated all of the tales. These are not happy every after stories, nor are they darkly depressing tales; they are snippets of life which reflect on those deeply felt, somber but not lacking hope, type moments.

With all this in mind, you may be wondering why I haven't marked it as a Buy, instead choosing to select Borrow for my rating. Simply put, short stories just do not capture me as much as full length novels: certain stories would be a Buy, others would be an Accept, so I'm splitting the difference.

GoodReads; Queering SFF; Out in Print;

This is another book which could be nominated for the GLBTQ Indie Lit Awards!  If you haven't already done so, head over there now and nominate a book.
Posted by Trisha at 5:58 AM