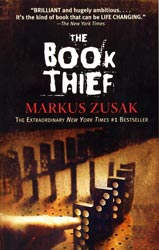 The Short and Sweet of It
In The Book Thief a young girl who steals books fascinates Death, giving him a little reprieve from his busy work schedule in Nazi Germany. The plot line is fascinating and Zusak artfully weaves the threads of this story, but I didn't fall in love with the book the way many did.

A Bit of a Ramble
Narrated by Death, The Book Thief certainly takes on a unique perspective. Using the point of view of a non-grim Grim Reaper to discuss World War II was a quite clever idea on Zusak's part, and he writes the introspective and slightly removed narration well. The use of a non-human narrator allowed the major themes of the story to be sort of smacked in your face. Death could actually articulate the themes; they didn't have to be suggested. Many times Death comments on the polarity and complexity of humans - and of course the story primarily revolves around this theme, so the relevant anecdotes from the story are plenty. But who needs the subtlety of illustrations when the ideas can be verbally expressed? As Death says:


I am constantly overestimating and underestimating the human race - that rarely do I ever simply estimate it. I wanted to ask her how the same thing could be so ugly and so glorious, and its words and stories so damning and brilliant.

While I adore the sentiment, I did get a bit turned off by the persistent referencing of this one (possibly self (or at least species)-aggrandizing) idea. I can think of three distinct times in the novel where this idea was directly stated.

The verbosity of the book is really the only problem I had. I felt like the book could have lost 100 pages or so and packed a much bigger punch, possibly cutting out some of the repetitive insights into humanity as a whole and maybe even removing some of the foreshadowing (well foretelling really; not much shadowy about just flat out telling you what's going to happen).

I do not want to give the opinion, however, that I did not enjoy this book. It is a fascinating read with a unique narration and structure, important themes, and absolutely detailed and eccentric characters. Going into the story, I was convinced it would be a Buy based on some of the reviews I read; it only took about two chapters for me to know it wasn't quite going to live up to my expectations (damn expectations). Once I got into the story though, once I met the intriguing and appealing cast, I found myself much more entertained.

I do wonder how much of my reading experience was affected by expectations - and how much was affected by the numerous WWII books I've read prior to this one. This was my first experience reading a work of fiction centered around the holocaust. Perhaps this didn't wow me because of my past experience with real accounts of the time. Who knows?

I leave you with what I found to be a great summation of the story, and a great way to start the story.


It’s the story of one of those perpetual survivors—an expert at being left behind.
It’s just a small story really, about, among other things:
I saw the book thief three times.

Question:  Do you think reading a work of fiction about a subject you typically read nonfiction on affects the reading experience?
Posted by Trisha at 5:20 AM