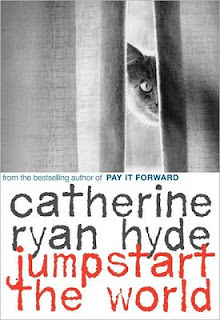 The Short and Sweet of It
Elle finds herself crushing on her next door neighbor in this moving coming-of-age story. A simply told tale, Jumpstart the World lightly questions sexuality and the role gender identity plays while simultaneously looking at the role of friendship in a young girl's life.

A Bit of a Ramble
When Elle's mother kicks her out because of her boyfriend, Elle moves into her own apartment, right next door to Frank and Molly. Frank is different; he's gentle and listens to her and makes her realize that maybe being a loner isn't all it's cracked up to be. Despite his girlfriend, Elle finds herself crushing on this man 15 years her senior. But then she finds out that he's trans* and her world is shaken.

I loved the delicate nature of this book. While it deals with some really deep issues, the book stays sincere and realistic in its treatment of important themes. For example, the story starts out with a significant thought told simply. Elle points out how her mother consistently uses the words beautiful and ugly without even realizing it. Elle claims that this tendency reveals a significant part of her mother's character: "Lately I've been noticing how people have these ways of accidentally letting you see what's important to them. I know it doesn't sound like any big deal. But it is to me. Because I'm not beautiful. And we both know it." I love this commentary on how the use of language, unconscious word choices, can not only reveal a person's psyche, but can also affect those who are hearing the language.

Later in the novel, Elle contemplates her feelings for Frank, after finding out he is trans*. "Why did I still feel the same way about him? How could it still be like that? But a little voice in the back of my head - well, not exactly in the back of my head, more like in a spot over my head - said "why" and "how" questions were almost never helpful. Things either aren't or they are. All the wondering in the world won't make things anything but just what they are."

While I don't necessarily agree 100% with that sentiment, I can see the simple logic of it. It's like trying to figure out why I love my husband. I could list all of his positive points, but many people are also smart and kind and fun and caring. I love my husband because I love him. In this case, I really thought Elle's understanding of the basic nature of her feelings impressive as she is so young and her situation so difficult for her.

I was also really impressed by something Amy of Amy Reads expressed quite precisely in her review of this book: "She doesn’t struggle with who HE is, but rather who SHE herself is." This sort of acceptance of difference while simultaneously addressing the issue is how things should be in literature! Another awesome blogger, Cass from Bonjour Cass expressed a similar sentiment: "Once Elle knows Frank is trans, she knows. There’s no hand ringing over whether or not he is “really” a man, and then she struggles with what her crush on him means for her own sexuality without questioning his. I found this completely refreshing." I feel like I am in the company of great minds since this fact really stood out to me as well.

There was only one problem I had with the book, really one section. As I said earlier, the book felt very sincere to me, except for one section. Every now and then a book which is going along smoothly suddenly includes a passage, a conversation, a section which is a little too preachy. Sort of like that horrific scene in Transformers where Optimus Prime (I think???) gives that little speech about how humans are so horrible and yet they are redeemed through their love for each other (the same thing happens in the movie Stardust and in War of the Worlds and in a bunch of other films). In Jumpstart the World, the overly profound section also includes the titular phrase which sort of doubled the ridiculousness.

That one section aside, however, this book was really enjoyable, and I highly recommend it.

Disclosure: Jumpstart the World made the short list for the Indie Lit Awards: GLBTQ and I am a panelist for that category. This review in no way reflects which of the shortlisted books will get my vote for best of 2010.