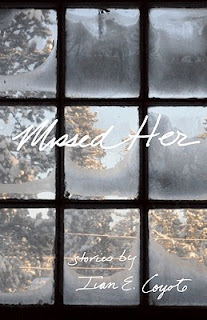 The Short and Sweet of It
Missed Her is a short, but moving, collection of personal stories focused on Coyote's experiences as a queer, butch, storyteller living on Canada's west coast. Each essay is succinct, powerful, and entertaining.

Each chapter (story) is quickly told, just a few pages, but the memory it is relating, the story it is telling, is beautifully told despite the brevity (or maybe because of it). Jackie Wong from Straight.com believes that Coyote's "intimate storytelling seldom grows tired, and her wry, unadorned writing style is unique in its conversational simplicity." That conversational simplicity really stood out to me as one of the joys of the book.

I firmly believe that the greatest truths can be told in the simplest ways. For example, I have an obsession, a healthy one, with the relationship between truth, fact, fiction and nonfiction. Coyote manages to break down my thoughts in a few simple sentences:


It is a true story in the same way that an old vase that is broken into pieces in the sink and glued back together holds water. Maybe, maybe not. But it is no less beautiful to look at. This is what I think I know.

The truth of a situation is not necessarily bound up in the facts, and I appreciated the acknowledgment of this, especially since it was related through a wonderful metaphor. Much of the writing is like this: short, simple, and profound.

This book also gave me the kick in the pants I needed to write up a post on my thoughts about a straight person reading and reviewing queer literature. In the past year, with the number of GLBTQ books I've been reviewing going up on the blog, I have received a few emails questioning this choice (from homophobes who think I am going to hell, from queer-identified people who are insulted that I am straight, etc.). But more on that in a later post... My motivation came from one of the stories in Coyote's book called “Some of My Best Friends Are Rednecks." The story focuses on one of Coyote's friends; he "has long, brown hair and a kind of bushy beard. He is from a working-class coal mining town in the southern US. He looks a bit like a good old boy. Like a redneck straight white guy." While reading one of Coyote's books on a bus, he is attacked by another passenger. She asks him: "Do you know the author of that book is a lesbian? Why would someone like you want to read a lesbian book? What is in it for you?" The aforementioned emails and one face-to-face conversation I have had was in the same vein: Why would a straight person read a queer book? In monsieur redneck's instance, he was being accused of appropriating the queer culture, and Coyote makes it perfectly clear that this is ridiculous. Thank you.

One of the best things about this book is the delicate balancing act Coyote plays between making this an "issues" book and just a damn good collection of stories. Cass from Bonjour, Cass! says that "this collection captures a very important image of what it’s like to be a queer person in way that many GLBTQ novels have not been able to do because they so often focus on a sensationalized idea of what being a queer person means in a homophobic society." I couldn't agree more. The stories in Missed Her are not spectacle; they feel real, sincere, and entirely relatable.