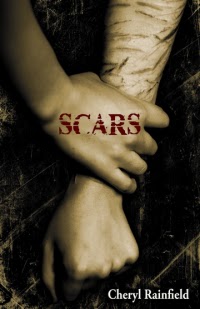 The Short and Sweet of It
Reading about a young girl cutting to release the pain of past sexual abuse is not easy. But Rainfield manages to balance the horror of the situation with some excellent storytelling, making this a good read.

A Bit of a Ramble
Kendra's life is being threatened by the man who raped her when she was a child, a man she cannot remember but can still feel. She cuts to release the pain that is inside her; it is her secret, her control. Kendra both wants to know who hurt her and wants to keep her abuser's identity hidden. But with a therapist she trusts and a girl she loves helping her, Kendra is starting to remember.

I quite rarely use the word 'raw' to describe characters. I think it is overused and as such is starting to lose some meaning. But I do think the word applies in this case. Kendra is 'raw' in many ways. She has been emotionally and physically scrubbed down to her bare self, and this is revealed both through the details of the story and through the honest and upfront writing style.

Kendra's sort of self-honesty is replicated in the lack of preachiness regarding her sexuality. As Heather at Book Addiction says: "There were clearly people in Kendra’s life who took issue with her sexuality...but It was just Kendra, being herself, being attracted to girls and finally finding the right person who could appreciate her and, ultimately, help her heal." The normalization of homosexuality is something I really look for in GLBTQ books. I want to read about GLBTQ characters without the book being The Author's Stance or a soapbox or some other platform.

I had two problems with the book. One big problem I had with the book was the ending. Well hello drama. Amy from Amy Reads had the same thoughts I did: "From the moment when she figures out who her rapist was it I felt it became too melodramatic and this, for me, detracted from the seriousness of the rest of the book." There was something just a little too much about how everything wrapped up.

My other problem is more about me. I have a cutting bias. I just don't get it. I feel bad because I don't get it. But I don't, and there you have it. This book did make me rethink my bias against cutting; it was handled well in that the reasons for it were explained in a way that makes the reader sympathize, but it wasn't elevated to an acceptable activity, and the dangers were clearly stated.

All that being said, this is a book I really enjoyed and I am glad I read it. So if you haven't had a chance to read it yet, find yourself a copy.

Disclosure: Scars made the short list for the Indie Lit Awards: GLBTQ and I am a panelist for that category. This review in no way reflects which of the shortlisted books will get my vote for best of 2010.