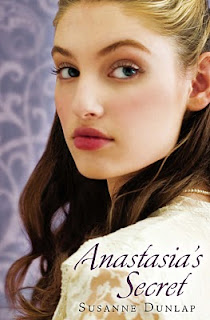 
The Short and Sweet of It
The story of Anastasia Romanova has become that of legend, but in this creative historical fiction, Anastasia's life is made real. She becomes not only the romantic figure of myth, but a real teenager.

A Bit of a Ramble
Young adult, romantic historical fiction is not exactly a genre with which I am familiar. My YAL tends to be of the fantasy variety with supernatural elements, paranormal beings, or futuristic settings. After reading this book, however, I may have to incorporate more of the historical bent.

While the story of the doomed Russian family is familiar, I will admit that I am nowhere near an expert on the Romanovs. Still they persist in our culture as a truly romantic ideal: nobility brought down by the Bolsheviks, a family executed. Then there are the diamonds of course - the image of children with diamonds hidden under their clothes, causing the bullets to bounce off and bayonets to be used. It is horrifying, tragic, and appealing to the far-removed state-of-mind (not so appealing if you think about it too hard).

The myth that has surrounded the family gives it an other worldly air, but reading Dunlap's novel brought home reality rather than myth. While sticking to the truth of their situation, she still managed to normalize the characters, allowing readers a glimpse into a royal family which comprises real people with flaws, secrets, pets, toys, inside jokes, hopes, and dreams. Anastasia is not a stately, composed, elegant Grand Duchess; she is a girl who wants to spend time with her family, to throw snowballs, to fall in love.

Despite the seriousness of the situation, Dunlap's book remains a light, easy read. While the sociopolitical and historical facts are interspersed within the story, the focus remains on Anastasia, her love for Sasha, and the day-to-day of her family's imprisonment. For some, this may be a drawback, but for me, it is a plus. If I want to read an in-depth, serious accounting of the time, I will read nonfiction, not a young adult novel.

My only problem with the book was the ending. The story ends before the story ends if you know what I mean. While leaving things off where they did lent a bittersweet air, the facts of the case are known, and as such, I would have preferred to see it through. For me it was like ending a story taking place on the Titanic just when the iceberg was spotted.

Ultimately however, this is a quick read that was perfect for my second snow day. I probably should have been reading Ulysses, or one of the many other readalong books I have this month, but I wanted something fast and light, and Anastasia's Secret worked out perfectly for that.

Giveaway
If you would like my copy, let me know in the comments section and include your email address. A small favor for those who ask, I really prefer it if anyone winning a book from me, especially one I have received for review, be someone who will review the book publicly as well (on a blog, GoodReads, LibraryThing, wherever). International entrants are always welcome!
Posted by Trisha at 5:37 AM