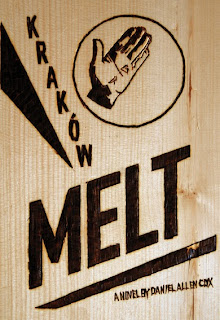 This was a very hard book for me to review. Typically I review a book immediately after finishing it. Like right after closing it. This one has been languishing next to my couch for about a month. Let me try to make sense of it:

Radek, a gay artist who practices parkour, is fascinated by fire. His art primarily centers around building small scale models of cities which burned and then lighting them on fire. Living in Krakow, Poland, Radek struggles with the homophobia of his country. He meets Dorota, a literature student, and the two explore their city and protest its injustices.

The book is strange, make no mistake. The plot is relatively meandering without a clear central conflict to guide the action. The narrative itself is broken up by letters from Radek to Dorota and vice versa, as well as political and historical discussions. There is even some notes on elephant sex.

Despite the relatively disjointed nature, by the end, the reader has a picture of the time the book covers, and the reader has been confronted with some serious issues: homophobia, friendship, sex, and love, and the universality of destruction and rebirth.

One big annoyance to me was the character of Dorota. She seemed to be created more as a perfect companion for Radek than a personality in her own right. This becomes glaringly clear at the end of the book, which I won't spoil for you, but which caused me to do a bit of an eyeroll.

I know it is considered bad practice - or a cop out - to say this, but here you have it: I am really quite ambivalent about the book. I didn't love it. I didn't hate it. My opinions feel disjointed - like I loved certain aspects such as the writing, the eccentricity, but I hated others like the writing and the eccentricity. Yep, I realize I am making no sense, but there you have it.

Question:  Have you ever read a book that you just could not decide how you felt about it?