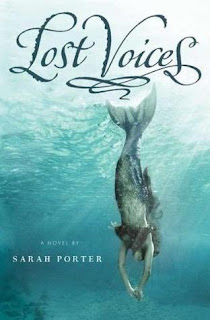 The Short and Sweet of It

In this lyrical and haunting tale, Porter explores a world in which girls, cruelly abused in life, transform into mermaids and find themselves wielding a great power over humankind.
A Bit of a Ramble
I have to admit that I was wary of a book about mermaids. While I would jump at the chance to read a mature book about these fascinating mythical creatures, I worried that a young adult novel centered on mermaids would be too Little Mermaid and not enough Sirens. Man oh lordy was I wrong.

The story is haunting and painful and atmospheric, like a strange cross between the pain of Emma Donaghue's Room or Elizabeth Scott's Living Dead Girl and your typical paranormal YAL. The main group of characters are all abused girls whose lives were so tortured they morphed into mermaids as escape. Now they live together in the sea, seeking revenge against humanity for the hell they were put through. These girls' stories are hard to read. And the heartbreak doesn't stop there. The sea is also inhabited by larvae, girls who changed too young; they are unable to really speak or swim, and the "older" mermaids are disgusted by them, leaving them to their fate instead of taking care of them. There is so much darkness in this story.

But I don't want to give the impression that the darkness is pure sensation without purpose; readers are treated to a story both horrifying and beautiful. Like a traditional fairy tale (instead of the Disney version) the world Porter has created feels infused with shades of gray. Black and white, right and wrong, are secondary to the complexity of personal growth and understanding. These creatures are beautiful and ominous and fantastic and pitiful and loving and dark. As with the Sirens of mythology, these mermaids possess the ability to lure sailors (and vacationers on cruise ships) to their deaths. Their desire for destruction is perfectly comprehensible both as a result of their abuse and as a result of their nature, the song calls to them.


It was overkill, far more enchantment than they needed to drive such a small boat to its doom, but she knew no one cared. They were all caught in the exaltation of their own voices, mad with the joy of power. She felt a rush of compassion for all the girls singing now: after all, they'd spent their human lives being so utterly helpless, how could they fail to be delighted by their ability to dominate anyone who heard them?

The story is also wonderfully lyrical and vivid. The words flow across the page, and the music of the language is complemented by the ocean setting and the songs which comprise such a large part of the mermaid culture. Once I started reading, I felt strangely lulled into the story. For me, this was a great example of Form mirroring Content.

This is the first in a trilogy, and as this book doesn't even come out until this summer, I have a long wait for the next installment. Ah, the joys of series.

Question: What series that is already 100% out should I distract myself with?