Book Review: This Girl is Different 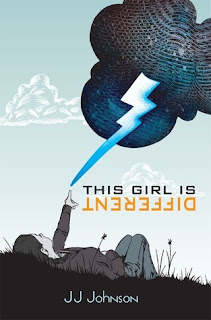 Summary from GoodReads
This girl is different… That’s what Evie has always told herself—and it’s true. Home-schooled by her counter culture mom, she’s decided to see what high school is like for the first time—for her senior year. And what a year it is.

As it turns out, it’s not just Evie who’s Different. Lots of people are. Many of her assumptions about others are turned on their heads as she makes friends with kids her own age for the first time, discovers what’s good and what’s bad about high school, and learns lessons about power and its abuse—both by the administration and by Evie herself.

The main plot line of the book revolves around Evie's - sort of self-indulgent - protestation against the authority imposed in public school systems. Evie organizes an anonymous protest of the abuse inflicted by one teacher upon a student - specifically, the teacher commented on a student's weight. To call attention to the inequality in the school, Evie (or another student) place a lightning bolt on the recipient's locker/door, and then write up a blog post about the person/incident.

This protestation snowballs with some "deserving" recipients of the lightning strike and subsequently less "deserving" recipients. While I applaud Evie's dedication to equality and fairness, I found myself sympathizing more with the principal than with Evie. Evie's reminders that she is different - This Girl is Different - combined with her anonymous activism seemed rather self-aggrandizing and immature. The principal, on the other hand, seemed a voice of reason, supporting the sentiment but not the means. I. Am. Such. An. Adult.

That is what I was reminded of throughout the book. I am an adult. I can no longer sympathize with the emotion-based sort of activism portrayed in the book. While some romanticize themselves, believing they would be the drug-imbibing, flowery-skirt-wearing, peace out hippies in the 60s, I just know I would be an ACLU lawyer. I think logic changes the world more substantively than emotion. And so, I find Evie's hippie mother frustrating, Evie herself self-important, and the school a bit over-the-top in its collection of totalitarian and unsympathetic teachers.

While reading the above paragraphs may suggest I did not like the book, that is not the case. I read the entirety in one plane ride and the story kept my attention all the way through. I may have felt removed from the story, but I still appreciated what it was trying to do, the message it was trying to communicate.
Posted by Trisha at 4:28 PM