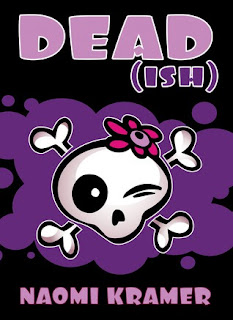 
The Professional Description
Linda’s had a bad day. First her boyfriend killed her. Then she woke up, still on this boring plane of existence, and with an odd obsession about her missing body. Mike won’t tell her what he did with her body and she can’t find the stupid thing herself. There’s only one thing she can do - torment the bastard until he coughs up the information.

A Bit of a Ramble
I read this quickly and probably a bit hazily on the plane ride back from Vegas. Five days of partying with minimal sleeping is probably not conducive to productive reading, but there you have it.  As such, this is going to be a rather short review.

The story is short (a novella), has quirky characters, and contains more than a smattering of ADULT LANGUAGE. That's right; I'm busting out the all caps. They cuss like sailors in this one. The story flips back and forth between a few characters, and while this means minimal character depth, each character is unique enough to garner some interest and the switching pov isn't confusing. While I wouldn't lay down a lot of cash for it, if you are looking for a fast, irreverent read, you could definitely do worse than Dead(ish).


Question: Has anyone read this or the sequels?