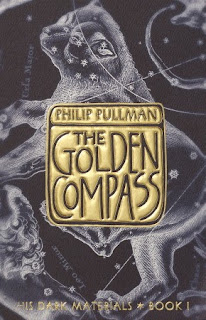 The Short and Sweet of It
The first in Pullman's His Dark Materials trilogy, The Golden Compass introduces readers to an alternate universe and the young girl who is unknowingly about to decide its fate.

A Bit of a Ramble
In this alternate universe, dimension, whatever, all humans have a constant companion in their daemon, a physical representation of the their soul which is attached to them from birth. The human and daemon cannot be far from each other, touching others daemons is strictly forbidden, and the two even share emotions. This relationship is at the center of the conflict in this book. To explain: kids' daemons change shape, but when maturity is reached, the daemon takes on a permanent form. And it is this point in a human's life which so concerns the antagonists in the book because it is at this point that a mysterious substance called Dust also begins to settle on the human.

While much is left a mystery in the first installment, readers can get a good notion of the series' conflict: the transition in humans from innocence to experience, purity to sin, childhood to adulthood. The Church - which plays an integral, powerful role in this dimension - wants to halt the transition, allowing humans to remain innocent forever. The way in which they hope to do this is horrifying, and it is clear quite quickly that we are fighting against the Church, aka the Magesterium.

This of course is rather upsetting to many people and Pullman's trilogy has been challenged and banned many, many times due to its negative representation of the church. I would argue, however, that the book is more geared towards promoting knowledge than it is towards denigrating religion.

Ignoring for a moment the serious themes in the text, the story itself is just downright entertaining. The world Pullman created fascinates me with its diverse population, political intrigues, and then there's the awesome possibilities opened up by the inclusion of multiple universes. This is my third time reading the series, and I must say that I am enjoying the nuances, the little details I missed before. I do so love a good re-read.


The Filmic Connection
I have seen the movie once, and as with so many adaptations, I was not thrilled by the exclusions. Particularly in this instance, the film version really tones down the central conflict, probably out of a fear of banning by fanatics. I still enjoyed the film as far as I can remember - it's been awhile - and I have it recorded on DVR right now, so I'm hoping to re-watch it soon.