Book Review: The Girl in the Steel Corset 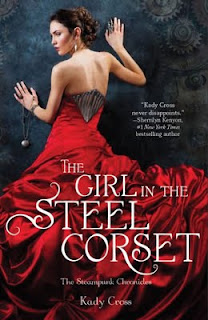 The Short and Sweet of It
The first in a new series, this steampunk thriller offers the usual: a girl still coming into her own power, fun gadgets and gizmos, a love triangle (two actually), and an intriguing bad guy. The story kept me entertained, and the characters kept me interested.

A Bit of a Ramble
When Finley Jayne is assaulted by her employer's son, she doesn't swoon or cry. She kicks his ass. I love her. Unlike many other YA books I've read in the past few years, this one has a protagonist who may be sweet and a bit unsure, but she does not hesitate to stick up for herself and demand respect. Her ability to toss around, leap over, knock out, or otherwise incapacitate anything or anyone thrown in her path certainly aids in her kickassery, but there is something about her personality which tells me that Finley would not stand for any amount of violence, asshatishness, or disrespect (as so many female heroines do in YA).

The other characters are just as intriguing. After beating her employer's son senseless, Finley realizes her actions may bring on attention of the police persuasion, so she runs. In her hurry, she is nicked by a velocyle driven by Griffin King, a Duke who is no stranger to extra abilities. Griffin can manipulate the Aether, use it for added strength, harness it as a weapon, and enter it to communicate with the dead. Soon Finley is living with him, and his "team": Sam, whose skeleton is partially metal, Emily, who has a strange connection to machines, and Jasper, who can move with surprising speed. Shortly after, she is helping them track down The Machinist, a man modifying automatons to his own nefarious purposes.

And then there's Jack Dandy, the third leg of the love triangle. He is set up as a rather enigmatic character: a sort of prince of the underworld. His house mirrors the dual nature of Dandy himself. Dirty and rundown on the outside, the inside is fancy. Dandy himself displays characteristics of a commoner, such as a Cockney accent "murdering" the English language, but the words he uses suggest a high level of education - and sometimes that accent disappears.

It is obvious that Griffin and Jack represent the dual nature of Finley, and it also seems obvious that Griffin is the one she is meant to end up with. Honestly, I am very very tired of love triangles. I think the whole situation is overdone, and the way these love triangles are portrayed indicate a wishy-washyness in the female character which I find mildly insulting. I am not saying females can't fall in love with multiple men; I am saying that the way YAL sets it up is a bit iffy. And I have a really brilliant idea (a wish I know will never happen). How about Finley ends up with both of them?

Griffin, Finley, and Jack happily living out their days together in a polyamorous relationship is what I'm hoping for. Let's do something new. Something original. Something representative of a real, but predominantly ignored, lifestyle. I'm betting that's as likely as Michelle Obama putting on a strip show for 20/20. But one can dream....

Despite my love-triangle burnout, I really enjoyed the book, and I am excited to start a new steampunk series (as if I don't have enough series going right now). This is one I may have to buy a print copy of!

Question: Is anyone else ridiculously tired of love triangles?