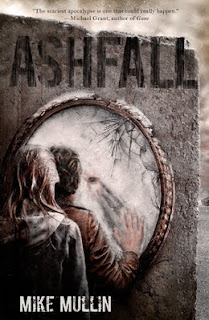 The Short and Sweet of It
On the day Alex's family takes off for his uncle's in Illinois, Alex is ecstatic. He gets to spend the entire weekend by himself. But before he can spend even one night alone, Yellowstone erupts and the world changes irrevocably. Now Alex is doing all he can just to survive as he crosses 100 miles in search of his parents and sister.

A Bit of a Ramble
It is not often that I read an apocalyptic book: post-apocalyptic, absolutely; dystopian, you betcha; but one where we actually get to experience the end of the world, not so much. And I must say, I really enjoyed it. I thought Mullin did a fantastic job of describing the aftereffects of a supervolcano erupting. The falling ash, the persistent noise, the extreme weather, all of it is laid out in detail, and the horrific nature of the event feels genuine instead of just sensational.

What I most appreciated about the book was that sense of realness without spectacle. Truly bad things happen in the story, but the events are not overblown or dwelt upon for effect; they are simply related as events which occurred. The devastation wrought by the volcanic eruption was not just geological or meteorological; it was social, cultural, ideological. I have absolutely no problem believing the loss of humanity exhibited by some of the characters. Said loss, however, does make this a more mature YA.

While the book is not particularly happy - it is reasonably grim actually - I never felt that all hope was lost. Some communities, some people, were still friendly, caring, and humane. Actually the diversity of post-volcano experience is one part of the book I really enjoyed. As Alex is traveling over a pretty good distance, he meets many different groups of people, from lone travelers to families in farmhouses to FEMA refugee camps. The diversity of people and their reactions to the disaster fascinated me throughout.

I did feel a bit of a brain twitch at the rather consistent repetition of the idea that what Alex was eating was subpar, but he was so hungry it tasted great. A sentence conveying that idea was used many, many times in the book, particularly in the beginning. A few other ideas or phrases were repeated throughout, but that's a very small annoyance in an otherwise entertaining read.

Overall, I am very happy I read the book - in just two sittings I might add - and I already anticipating the next installment in the series.