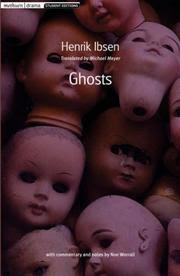 The Short and Sweet of It
Ghosts takes place over one night at a mansion in Norway. The majority of the story is unveiled in a conversation between the protagonist, Mrs. Alving, and a pastor from a nearby town, Manders. The two are building an orphanage to honor the late Captain Alving, a man Manders believed to have been an honorable man, but who in fact was a scoundrel and a drunk. Alving's actions in the past are influencing the present through his son, Oswald.

The metaphor of ghosts is entirely appropriate as the remnants of the past have a dire effect on the present situation. The truth of the past and the lies told about it are a constant presence in Mrs. Alving's life, and she is overcome by these ghosts daily...as we are all influenced and haunted by our past and our ancestors...except maybe a bit more extreme due to the nature of the Captain's errr...illnesses, both social and physical.

I chose this play for my Introduction to Literature class for two reasons: one, I had never read it and that is almost a necessity for me in teaching (I really like something new); and two, the critical reaction to the play was one of horror. The play was described as "one of the filthiest things ever written in Scandinavia", "an open drain: a loathsome sore unbandaged", and "unutterably offensive". I just had to find out why. Turns out, there isn't anything a modern reader would find obscene, maybe a bit dirty, but not exactly obscene. And that is perfect for teaching the historical perspective and ideology, so I'm excited.

Thematically, the play stretched the minds of its contemporary audience, promoting joie de vivre and independent thinking while criticizing traditional morays and values, specifically in regards to feminine "duty". I can't wait to see what my students make of it.

This is my first real review since June 7, and I must say I have missed the blogosphere something fierce. It was nice to read a book that actually made me want to sit down and write, to discuss, to share. I've read other books this summer, all re-reads, but this is the first that had me jonesing for the blog. I am in the middle of two others: The White Album by Joan Didion and Black American Short Stories.  I'll definitely be writing something up on those when I'm finished!

In other words, I feel the return to blogging coming along!

Question: How much do you think "the sins of the fathers are visited upon the sons"?