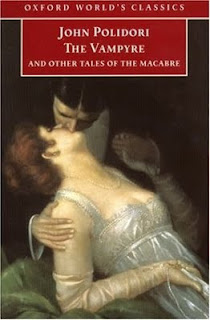 The Background Information
I just had to share with you guys the awesome story behind this novella. Polidori, the author, was Lord Byron's physician and accompanied him to Lake Geneva. There, the two met up with Percy Bysshe Shelley, Mary Wollstonecraft Shelley, and Clare Clairmont. Bad weather kept the group indoors, so to pass the time, they - in Decameron-esque fashion - decided to swap ghost stories. The end result? Mary Shelley's Frankenstein and Polidori's The Vampyre (originally attributed to Lord Byron, possibly a marketing ploy).

Oh, and did I mention that this is the first real vampire story (at least in contemporary form). And we all know how damn prevalent those pesky blood suckers have been ever since.

The Short and Sweet of It
Audrey, an innocent, young aristocrat develops a boy-crush on a distant, but intriguing Lord Ruthven. Determined to learn more about the enigmatic man, Audrey accompanies him on his travels. When Audrey discovers Ruthven's plan to compromise a young woman, he foils the plot and leaves Ruthven. But he cannot escape the determined gentlemen so easily.

A Bit of a Ramble
What distinguishes this vampire tale from the ones published prior is the vampire himself. Originally vampires were animalistic creatures with horrible visages, driven by overpowering lust (for blood). Today vampires are suave, intelligent creatures driven by a pressing lust (for blood and sex). Lord Ruthven, Polidori's vampire, is a first incarnation of the contemporary vampire. He is removed, distant, but that lends an air of mystery which the aristocracy, and particularly the ladies, find irresistible. He has "a winning tongue" and is able to seduce when it pleases. And of course, he desires to feed from beautiful, virginal ladies. Yet he remains ruthless. No reluctant drinker here my fellow readers.

Speaking of the ladies, the book directly states a circumstance of romance which has pricked at my mind for ages: the male fascination with the childlike female. Aubrey's love interest is described:


...her innocence, so contrasted with all the affected virtues of the women among whom he had sought for his vision of romance, won his heart...Ianthe was unconscious of his love, and was ever the same frank infantile being he had first known.

This adoration of immaturity has always disturbed me. I can see the appeal described in the first sentence (if interpreted in a specific way). Simplicity (not of the mind, but of lifestyle and pretension) can be very refreshing after spending time amongst schemers. But that interpretation is set on its head when one reads further and hears that Ianthe was a "frank infantile being". Clearly what we are talking about then is Ianthe's childish nature, a lack of knowledge and experience which makes her easily led and almost amusing. I guess I've just never seen how that is attractive. Personally, the idea of dating even a 24 year old gives me chills.

Issues of this nature, however, are reasons I love reading the classics. Not because these issues only exist in the classics, clearly they do not (Bella and Ianthe would probably get along well), but because they lay it out so clearly for us to see, with no subtle suggestion or hidden interpretations; it's just right there on the page. And I do so love how it makes me think.

But back to the story itself. At a mere forty-some-odd pages, this novella still manages to summarize a story. That's right, I said summarize. The style here is that of relating what happened with minimal dialogue and detail. This is a style I find highly efficient even if not particularly entertaining. I would still suggest reading this one, however, both for its significance to such an important genre and because at its heart, it's still a good tale.