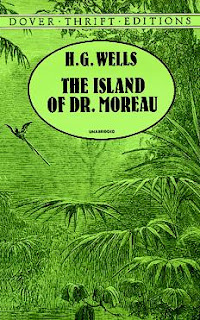 The Short and Sweet of It
After being rescued from a death at sea, Edward Prendick is cast ashore with his savior, Montgomery, on an island run by Dr. Moreau. Once there, he finds himself immersed in a mystery as strange cries are heard from beyond his doors.

A Bit of a Ramble
If anyone doesn't yet know, the main premise in this short novel is about playing god. The island is a medical compound-slash-dumping ground for Moreau's experiments which involve vivisecting animals in an attempt to make them more human, modifying both their physical appearance and mental workings. Moreau discounts the animals' pain and completely ignores his creations once he realizes they are not all he wants them to be, and hence he is slowly populating the island with animals which look and act primarily human. No matter the changes, nature overcomes and the modified creatures once again return to their natural habits.

I really enjoy thinking about the relationship between instinctual, more animal behavior and the civilized behavior of humans. The balance between our "civilized" and "animal" selves fascinates me. Looking at this issue through civilizing animals was a wondrous exploration, and while not explored in great depth, still touched upon the primary premise: our true nature will always win out.

The creation which forayed the furthest towards humanit was M'ling. He is the current servant/pet of Montgomery, Moreau's assistant. Montgomery alternately adores and abuses M'ling, in a sort of confused relationship which intrigued me as it confused me. He is, to me, the most pitiful of the characters in the story. Subservient, obedient, loyal, relatively intelligent, and rather adoring, M'ling seems to possess some of the best qualities of both human and animal. Caught between the two worlds, he seems more of a bridge than a confusion.

I read this alongside "The Call of Cthulhu" by H.P. Lovecraft (see yesterday's review), and I have to say this won out. I think it had an unfair advantage though in that I'm not a huge fan of short stories. Even this short novel felt rushed, and I wanted more depth, more time with the characters and the themes. I will say that Cthulhu is a much more fascinating monster, and a larger story based on the gods of that story would get my geek going more than Moreau did.

Have you read both these stories? Which do you prefer?

Be sure to check out the other reviews of The Island of Dr. Moreau and the reviews of the opposition, "The Call of Cthulhu".

You can also find more reviews at the Book Bloggers Search Engine!