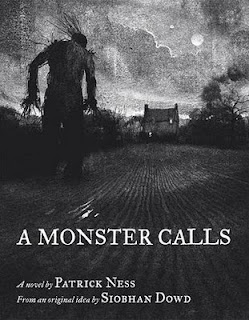 
The Short and Sweet of It
Awesome.

A Bit of a Ramble
My love for Ness's Chaos Walking series pretty much ensures I will read anything that man writes, so when I heard about A Monster Calls, it went on the wish list immediately. I even defied my book buying ban to get my hands on it (although I am proud of the fact that I held out for a few months at least).

I have to say though that even without Ness's name attached, I probably would have bought this one anyway. Ever since reading Brian Selznik's The Invention of Hugo Cabret, I've had a fascination with books which include extensive illustrations. A Monster Calls uses numerous illustrations throughout and they are done in a wonderfully creepy, gray scale style: 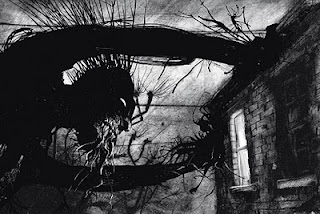 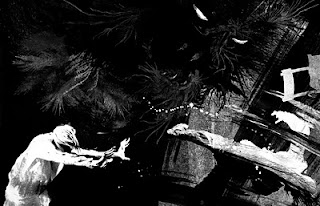 Aren't these just beautiful pieces of art?! I loved looking at these pictures and spent a great deal of time gazing at them, letting my imagination wander.

The story is just as wondrous. Truly unique, the tale features three stories from the monster which reveal important truths but not ones typical for a fairy tale. I was so impressed with these stories: the way they worked together to complement the main narrative and the way they revealed humanity and not a pat moral. Because I myself am big on not spoiling the plot, and I honestly believe this is one tale which you need to know very little going in, I'll stop there.

My final thoughts on this one revolve around something rather embarrassing. I want to preface this by saying that I am not a crier. Seriously, I can only think of a few stories, whether books or film, which made me cry: Schindler's List and Braveheart are really the only two that spring to mind. With this one, there were a few moments, I was getting teary and one where I wanted to bawl like a baby. The worst part is that I was in Barnes and Noble while reading, smack in the middle of the cafe, so I had to force back the tears and try to keep my face from doing that horrid, tense, smooched up look one gets when trying not to cry.

So my advice is to go now and buy this book, but try to read it in private, so you can indulge in a bit of weeping.
Posted by Trisha at 5:32 AM