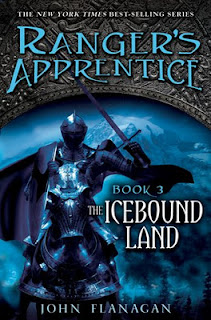 The Short and Sweet of It (from Amazon)
Kidnapped after the fierce battle with Lord Morgarath, Will and Evanlyn are bound for Skandia as captives aboard a fearsome wolfship. Halt has sworn to rescue Will, and he will do anything to keep his promise—even defy his King.

Expelled from the Rangers he has served so loyally, Halt is joined by Will’s friend Horace as he travels toward Skandia. On their way, they are challenged constantly by freelance knights—but Horace knows a thing or two about combat. Soon he begins to attract the attention of knights and warlords for miles around with his uncanny skill. Even so, will they be in time to rescue Will from a horrific life of slavery?

A Bit of a Ramble
What fascinated me most about this story was not the fighting scenes or the heroism, but rather I was struck by the loyalty portrayed. The first two books focus on Will's developing love and loyalty to his mentor and friends, but in this installment, the loyalty is returned. Halt purposefully gives up what he loves, dishonors his country and defies his beloved Ranger Corp, to save his apprentice. Horace bravely leaves his training and his home to save his friend. And Evanlyn finds a strength within herself she never knew she possessed to rescue her friend.

I am drawn to characters, and the people in this tale are not only intriguing in their own right, but their connections to each other really lends a level of believability and relatability I appreciate. The things we do for each other and because of each other define us as humans, and seeing this quality carried out in fiction is a real treat for me. I am enjoying the community being built in this series, and I sincerely hope this sense of togetherness and interconnectedness continues in the remaining installments.

Now, on to book four!

Question: What are other truly wonderful communities of characters you think I should take a look at?