Book Review: The Battle for Skandia 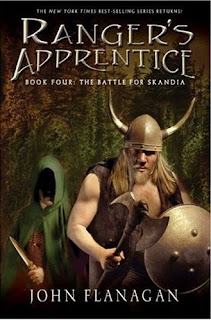 The Short and Sweet of It (from Amazon)
Still far from their homeland after escaping slavery in the icebound land of Skandia, Will and Evanlyn's plans to return to Araluen are spoiled when Evanlyn is taken captive by a Temujai warrior. Though still weakened by the warmweed's toxic effects, Will employs his Ranger training to locate his friend, but an enemy scouting party has him fatally outnumbered. Will is certain death is close at hand, until Halt and Horace make a daring, last-minute rescue. The reunion is cut short, however, when Halt makes a horrifying discovery: Skandia's borders have been breached by the entire Temujai army. And Araluen is next in their sights. If two kingdoms are to be saved, an unlikely union must be made. Will it hold long enough to vanquish a ruthless new enemy? Or will past tensions spell doom for all?

A Bit of a Ramble
We meet a new set of characters in this installment: the Temujai, a warlike, communally focused race, intent upon destroying Skandia and moving on to Araluen. I am really enjoying the development of this world through the introduction of various countries. Araluen, Skandian, or Temujai, each nationality is distinct and intriguing. Like in many YA books of this sort, the "good guys" are most definitely better than the "other guys", and the "bad guys" are definitely "bad"; however, I am rather pleased that we do get to see a bit of the humanity of the Temujai.


As I said in my review of book 3, I am really interested in the creation of a community of characters, specifically in their loyalty to each other which in many cases trumps their loyalty to country. In this book, that theme is furthered as the Araluen and Skandian must join together against a new enemy. The focus of this book, however, is on War Strategy and Execution, and I was super pleased with this. The tactics used and the eventual battle itself really captured my interest.