Book Review: The Ruins of Gorlan 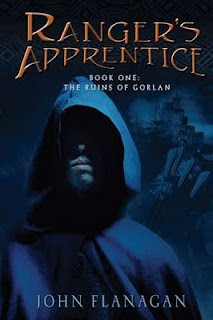 
The Short and Sweet of It
At fifteen, Will walks into his Choosing, the ceremony in which he will be apprenticed. He wants to be a warrior, to join the Battleschool and become a knight. Instead, he becomes the apprentice to a Ranger, a mysterious man who teaches him that wars are not only fought after an initial attack, that Rangers must find the battle before it reaches them.

A Bit of a Ramble
Allie over at A Literary Odyssey convinced me to buy the first in the Ranger's Apprentice series when she said, "Flanagan manages to create a lively world (modeled on Europe), full of drama, suspense, and mystery. There is a huge cast of characters, but every one of them seems lively and true. There is danger, adventure, sword fights, and lots of description of battles and tactics. That part of the book always reaches my nerdy little core."

My nerdy little core cannot help but agree. After reading just one book in the series, I am convinced that I will really enjoy this. The main character, his group of friends, and the mentors in charge of them all are unique, fascinating, mysterious characters, and I can't wait to get to know them better. The story is rife with possibility at this point, which after a bunch of predictable YAL, is something I really appreciate. I love it that this story could move forward along so many different paths at this point.

And I am totally geeked out that there are ten books in the series. I even disregarded (yet again) my book buying ban and bought the next four in the series. I'll probably ask for the rest for Christmas. :)

Check out the Book Blogs Search Engine for more reviews!