Book Review: The Name of the Star 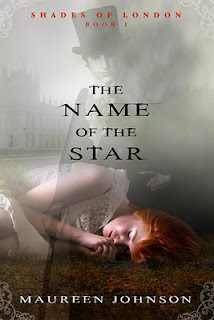 
The Short and Sweet of It
Johnson's first installment in her new trilogy introduces readers to Rory, a Louisiana girl attending boarding school in London. Her life is irrevocably changed as she becomes embroiled in a mystery sweeping the town: a series of murders imitating the sensationalized Jack the Ripper killings.

A Bit of a Ramble
I think my brain was fried when I sat down to write this review, so I'm going to do things a bit differently and respond to some of the other reviews I read.


What captures me most about this novel is the freshness. Pam of Bookalicious believes "Johnson has breathed life into a genre swiftly turning stale and blended thriller with paranormal with humor in a recipe that is guaranteed to please."  I agree. It's odd, but I think what really lends this new life to the story is its serious lack of melodrama. As Amanda from Ramblings says, "[Johnson] makes her characters believable and real without glamorizing them. She makes them feel like teenagers without belittling or stereotyping them. She rides through drama without becoming melodramatic or letting anything get too big. She has a dry humor that helps to keep the book grounded even as tension builds." Even as things go wonky with paranormalcy, the plot, the characters, the setting, it all feels real, almost mundane.

The realness of the characters was especially pleasing to me after re-reading the Twilight series. Chris, over at bookarama, pointed out something I thought the whole time I was reading: "Rory doesn't get all "Whoa is me! Why?! Why?!" Her new abilities come as a shock but she knows she can do some good with them." This lack of self-deprecation, depression, and pessimism was sooooo refreshing. Chauceriangirl from Quirky Girls Read specifically points out that "Rory navigates everything with an air of befuddlement, but she also stands up when she needs to stand up." Complete opposite of Bella I might add.

Steph of Steph Su Reads sums up how she (and I think all the above mentioned bloggers) feels when she says The Name of the Rose is "a freakishly delicious creepfest of a new series that had me gasping, shuddering, and turning pages almost faster than I could read them." I am not quite as adamantly in love as the rest of them, but I still really enjoyed the book and look forward to the next book in the series.