Book Review: The Sorcerer of the North 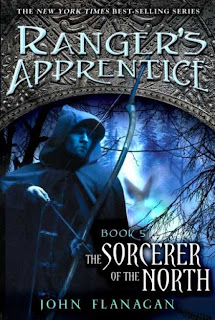 
The Short and Sweet of It
Will finally is set off on his own, but not to fight the straightforward, frontal assault enemies of the past. This time he is up against a legend, an elusive sorcerer rumored to be poisoning the king of a northern fief, a land integral to the protection of the whole kingdom.

A Bit of a Ramble
As with all of the Ranger's Apprentice books, I loved the characters, the battle tactics, the weaving of plot lines, and the setting. Seeing Will strike out on his own was almost poignant, like watching a nephew become an adult. I feel like I know Will, like I am somehow a part of his life, responsible for him or his therapist or something. I also enjoyed the pretext under which Will travels: that of a jongleur, a traveling musician, singing for his supper. This role is so different from Will the Ranger; as a jongleur, he is affable, outgoing, a bit goofy. It's nice to see this side of Will, pushed back because of his secretive, serious duties.

I do have one problem with this installment however. The ending. Or rather, the lack thereof. While I appreciate the fact that a series is a continuance of the same story, I like my books to have a relatively full an complete plot. Books, even in a series, which just end with no resolution whatsoever, or in some cases even a climax, drive me bonkers. Everything is up in the air at the end of this one, an unexpected development in this so-far-self-contained series.

This unsatisfactory ending is why this installment has received an Accept rating instead of a Borrow. While the story itself is just as entertaining as the rest, that one little travesty (in my opinion) really affected my overall judgment. I realize it's a quite specific pet peeve though, and not everyone feels the same as I do.

In a strange irony, I've been flying through this series prior to this book. And now, when I really have to read the next installment to see what happens, I'm putting it off. I'm weird, what can I say?

Question: Does anyone out there enjoy cliffhanger or unresolved endings?