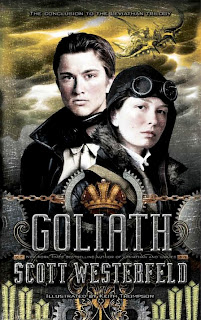 The Short and Sweet of It
The third and final installment of the Leviathan trilogy, Goliath follows Alek and Deryn in their quest to end a war between Darwinists and Clankers, two opposing ideologies which drive almost every country on the planet.

A Bit of a Ramble
I have already discussed many of the issues I enjoyed with this book: the intriguing politics and the deceptively simple take on gender. But there is one statement I made in that post which I now whole heartedly disagree with. I said I was a bit disappointed that the book had strayed so far from action into a more character-centric focus. Specifically, I was referring not to overall character development and the relationships and personalities of the cast of characters. I was worrying that the burgeoning romantic relationship between Alek and Deryn would take center stage. While I appreciate a good romance, I prefer it to be secondary to the real story, a happy offshoot of a journey or adventure rather than the main focus. The last half of the book proved my suspicions wrong, and ultimately I believe that this story had the perfect mix of action-adventure and romance.

In my review of the first book in the series, I stated that the story is entertaining, with wonderful characters, intriguing themes, and a beautifully-described world, and now that I've finished the series, I believe that statement still holds true. If I had one complaint about reading this book, it is that I had to wait so long between Behemoth and Goliath. I really, really prefer to read my series from start to finish, first book to last book, back to back, in as little time as possible. That is one of the changes blogging has made to my life. Now, I keep hearing about these must read series with only the first installment out, and I just can't force myself to hold off on reading! I can't wait to find some time (that elusive bugger) and sit down and read the entire series back to back. Maybe that could be a plan for the April readathon...

This book completes a series, meaning I get to check off one series from my gigantic list of to-reads that make up one of my Reading Goals.
Posted by Trisha at 5:27 AM