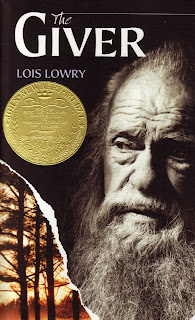 A Bit of a Ramble
I think I should absolutely love this book, and I did right up to the end, and then bah. I found the ending very unsatisfactory. Typically, I don't mind a bit of mystery at the end, a mild lack of closure, but to me, the end of this book is completely abstract. I don't feel like there is any resolution whatsoever and that just frustrates me.

But to the good parts: The world is simple enough to be easily understandable to middle schoolers, but detailed enough to lend weight to the plot. Jonas is a likeable character who comes to the realization that life is more than his world allows gradually and organically; in other words, readers can easily believe in his transition. There's enough side detail (subplots, other characters) to not only keep readers interested but to also add import to the overarching plot line. And some of those side details are pretty freaking serious for the intended audience by the way.

But damn that ending. I just didn't freaking like it. The ambiguity feels disingenuous, more like a cop out than an artistic choice. I get that readers can "choose their ending", which apparently fits along with the theme of choice which runs throughout the book; but no. When I read a book, I want the author to make the ending. I don't want to "choose" how a book ends. I really think this one would have received a Buy rating if not for the ending. Okay, rant over.

On a side note, I was trying to figure out if I had ever read this before. I'm sure I have since the copy I have on the shelves had most definitely been read (and many times), but I didn't have any real memory of the book. It was strange. Like I wasn't surprised by what was happening, but I didn't "remember" it either.

Question: Was anyone else annoyed by this ending? It certainly seems like I'm the only one.


NOTES
Totally read this out loud to Madison, so technically, it is her first book. :)
Posted by Trisha at 5:50 AM