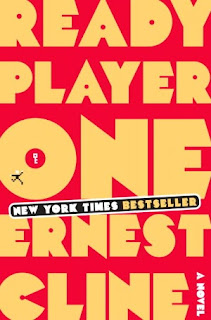 The Short and Sweet of It
James Halliday, the eccentric, 80s obsessed, creator of OASIS, a virtual reality used the world over, left his entire fortune to the person who can win the devilishly clever game he created within OASIS. Years later, Wade Watts discovers the first clue. And the games begin.

A Bit of a Ramble
First and foremost, may I just say how much reading this made me miss World of Warcraft. I stopped playing some time ago when I could no longer justify the monthly fee based on my availability to play (freaking work and sleep and family and the such not). I still hope to some day resurrect my character and start playing again. *sigh*

The world Cline has created is relatively miserable. Poverty is rampant with people going hungry and living in trailer parks where the trailers are stacked on top of each other. But who cares about all that when most of the people live their lives in OASIS, a virtual reality of infinite possibility. Oh, World of Warcraft, how I miss you....

But to the story... Fantastic. Seriously. I devoured this book, all 372 pages of it, in two sittings. I was totally engrossed beginning to end, and honestly I am a bit sad that it's over. This will definitely go down as one of my favorite reads of the year. Fast-paced action, intriguing characters, unique plot line, and then there's the awesomeness of continual 80s references. I was born in 1980, so while I can't make the claim to have truly LIVED the 80s, I was certainly alive and cultured by the 80s. Geek. Nerdgasm. Non-stop action. Technology. Nostalgia. I'm so freaking geeked by this book I can't even articulate properly. Okay, pause, breathe.

I could sit here and tell you more about the exhilarating plot or the unique characters or the complex setting, but instead I'll let you experience it all on your own. Now go read. Or maybe you should listen. I hear the audio version is fantabulous which makes sense as it is narrated by Wil Wheaton. And that choice makes perfect sense as who better represents 80s geek culture?!?!

NOTES
Received from Crown for the ILA Short List
Won the 2011 ILAs for Speculative Fiction
Posted by Trisha at 5:04 AM