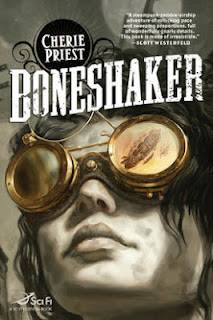 Series Reviews: This is the first

The Short and Sweet of It
Leviticus Blue built a machine to expedite drilling for gold in Alaska, but he jumped the gun and used the "Boneshaker" to poke around in subterranean Seattle. His little underground adventure collapses a few banks and releases a pocket of gas which introduces a new plague. The blight gas kills those who breathe it; some of the dead become rotters (aka zombies). To combat the blight, a wall is built around Seattle and almost everyone is evacuated to the surrounding areas which quickly degenerate into dangerous slums. And all that happens before the book begins.

The story itself is of Blue's wife, Briar, and his son, Zeke. Zeke, always curious about his absent father and intent on proving his innocence, heads into the walled off city looking for evidence. Briar follows him in. And their adventures begin.

A Bit of a Ramble
I was just not into this story. It took me forever to get through, and I have no desire to pick up the next book in the series. Please lord tell me I didn't buy all three on the nook at once. Eh, I don't even want to check.

Despite the fact that I know I didn't like the story much, I am having a great deal of difficulty explaining exactly why I didn't like it. For the most part, I think, I was just bored. And how in hell could I be bored with a book that's all steampunk and zombies? And there are AIR PIRATES people. I love me some good air pirates. Not to mention the fact that everyone else loves it. And now you are expecting some insight into why I didn't like it. But nope. Nothing. I have no idea why I didn't enjoy this one. I could fall back on the "lack of depth" comment.The various settings and histories don't really converge into one cohesive world for me, too many disparate stories and characters present themselves without any real internal logic or depth. Maybe that's why I didn't like it?

I didn't give this book an Avoid rating though, in part because while I wasn't too impressed, I didn't actually put the book down. I still wanted to finish even though continuing to read was a bit painful for me.


Question: Did anyone else find this boring?


NOTES
It sort of counts towards my Goal #2: Manage My Series (except that I bought it, adding to my already ridiculous quantity of series to read). But I don't know that I'll continue with this one.
Posted by Trisha at 6:00 AM