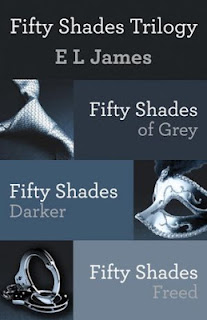 Series Reviews: They're all here

The Short and Sweet of It
Anastasia Steele's life changes when she interviews the enigmatic Christian Grey, a billionaire businessman with eccentric sexual preferences. Driven by a need to control the world around him, Christian is flustered by Ana's resistance to his domineering personality.

A Bit of a Ramble
Originally, James wrote Twilight fan fiction where Edward and Bella were a bit more sexually active (yeah, just a bit...like a lot from what I hear). After receiving quite a bit of backlash, she decided to rework her story into a full length novel with her own characters (no vamps). With that, Fifty Shades was born.

The sex scenes are explicit, raunchy, and pretty damn hot. At first. I was all over the first book in the trilogy, enjoying the dirty quite thoroughly. While I'm not a whips and chains and swinging things kind of girl in the real world, I certainly don't mind the fantasy of it. For a girl who (now) rarely reads romance novels and even when she did, stayed in the straight-forward, vanilla sex type of romance, this was something new and exciting. But as I progressed through the trilogy, much to my surprise, I found myself getting pretty bored with the sex. Yes, yes, yes, she rolled her eyes so he wants to spank her. Oh, now she wants to push her limits a bit further and bust out some restraints and a flogger. Whatever. These two have A LOT of sex, and while it's pretty hot stuff most of the time, I think a bit less of it would have kept the excitement going throughout the whole trilogy. Then again, I recognize that I read all three back to back which probably has a great affect on the spectacle of kinky fuckery (my favorite term from the book).

I will say that I had a huge problem with Ana for most of the book. She allows things to happen to her just to please Christian. Most of the time when she is trying something new, it's not because she wants to; it's because she is afraid to lose Christian and she knows how much he "needs" to dominate her. Why in the world can't she just like it? Don't get me wrong; Christian is not raping her or forcing her to do anything she doesn't agree too. And most of the time, she does like it. But her motivation for kinky fuckery is 9 times out of 10 for him instead of for her. Ridunculous.

So now that I've complained enough about the book, I do want to say that I do not regret reading these books at all. Despite the shortcomings, Fifty Shades is unique and different, and I enjoy unique and different. I'm happy the first book in the series was so popular, and I love that women's reaction to the series has spurred discussion of female sexuality and the difference between a rape fantasy and a domination fantasy. Too often it seems like people get the two confused, flying off the handle about Rape Culture when a book merely suggests that some women want to be dominated. Some do. And there's nothing wrong with that. While Ana could be a bit more in control in my opinion, she's still strong enough to warrant a pat on the back for the way she explores her sexuality.
Posted by Trisha at 12:16 PM