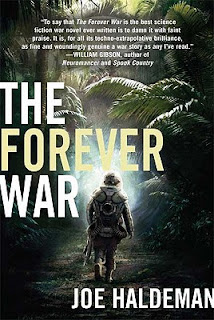 The Short and Sweet of It
William Mandella is drafted into an interstellar war against the Taurans which totals four years for him and centuries for those on his home planet due to the time dilation of space travel. Sweet.

A Bit of a Ramble
I read this one to see if I want to use it next year for my Intro to Lit course. The book won the Nebula Award, the Hugo award, and the Locus award in the mid-seventies, and it is touted as AN EXTREMELY IMPORTANT BOOK IN THE SCIENCE FICTION GENRE.

For me, the real attraction was the autobiographical connection. Many claim the book is a reflection of Haldeman's time in Vietnam (maybe I'll assign Vonnegut's Slaughterhouse-Five along with it?). While the book uses time to cause feelings of alienation, I can definitely see how the alienation experienced by soldiers returning from Vietnam (or any war for that matter) would be similar. For Mandella, everything changes, culture, language, politics, and so on. But even a soldier returning to his or her own time faces a dramatic shift. I can see this being a great talking point for the class. I also think it would be interesting to discuss how people make sense of their experiences through semi-autobiographical works, especially in the area of science fiction.

The only real issue I see with using the book for a course is the focus on sexuality. Sex is treated rather pragmatically and openly in the book with soldiers being paired up for sleeping partners: man-woman in the beginning (when heterosexuality is the norm on Earth) and man-man, woman-woman towards the end (when homosexuality is the norm on Earth). While I love this openness and focus on ideology as determinant of "normal" sexual behavior, I am not sure my students are necessarily ready for the directness of the issue (due to the current puritanical ideology). I still haven't made up my mind...

But back to a review... The plot is fast-paced but not intense without substance (a la a Michael Bay film - no offense meant. I enjoyed Transformers). The characters are well fleshed out, multifaceted humans (as opposed to caricatures). Even with all the "Elements of Literature" working well, at its core, this book is about things: war, politics, individuality, sexuality, love, morality, sacrifice, and bravery. Good stuff.