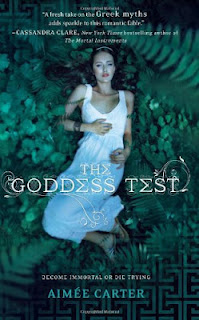 Series Reviews: This is the first.

The Short and Sweet of It
When Kate finds herself in a position to prolong her mother's life, she can't help but take it. Henry, aka Hades, aka God of the Underworld, offers her time to say goodbye in exchange for living with him for six months and possibly becoming his bride. She just has to pass seven tests. And stay alive.

A Bit of a Ramble
I bought this one because of all the reviews clogging the blogosphere last year. I finally read it because the second came out, and I adore reading series books back to back. Plus, who doesn't love modern takes on Greek mythology?

The myth in question for this book is that of Persephone, the woman forced (?) to spend six months of the year in the Underworld with Hades. I was impressed that this story wasn't a rehashing of the original but rather a continuation where Persephone chose mortality and ran off with Adonis ages ago leaving Hades all alone and love sick. Enter 11 new girls who are offered the chance to become the new Queen of the Underworld. They fail. And no I don't really think that's a plot spoiler.

I will admit that I was a bit bored with the story. I plowed through it in a day (a day spent with my attention-whore of a daughter (okay whore may not be the right word here...) I might add). I was hoping for a bit more action, a bit more of the gods. We don't even get to see the seven tests she has to pass; they are all rather easy and more about being a "good" person than anything else. It would have been nice if she had to face a serious challenge.

The love story between Kate and Henry (it's not like you didn't know that was coming) is also a bit underdeveloped. I can't quite figure out why either is in to the other. Kate seems easy going to the extreme, casually accepting events and behavior that would put most on edge, and that trait is about all we know about her except she loves her dying mother. Henry is just brooding, in a very umm...brooding fashion.

Despite all this, I still think it's worth a read if the book crosses your path. It's sort of like eating a marshmallow: light and fluffy and not all that satisfying but still enjoyable.
Posted by Trisha at 5:00 AM