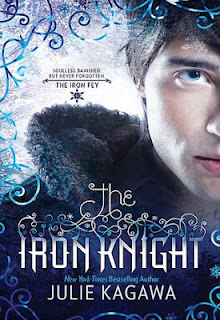 The Short and Sweet of It
When the woman he loves is made queen of a kingdom which would kill him, Ash vows to find a way to be with her. But a journey to beat all odds comes with a price.

A Bit of a Ramble
SPOILER What I found most intriguing about the book was the large role Ash's first love plays in the tale. We spend almost no time with Meghan here as the story is Ash's quest to find a way to be with her; instead we spend a whole bunch of time with the one who got away, the woman he loved and would have spent his life with had she not died (or not, or did, or not...). It is typical of novels focused on luuurrvvee to operate under the assumption that there is only one love of a lifetime, that we have one soul mate and all others pale in comparison. That is decidedly not the case here. I kind of like that. END SPOILER

My problem with this book is Ash. In previous novels in the series, Ash is action. He is ruthless and focused and sure of himself. In this book, not so much. Instead he is all Hamletish with the introspection and self-doubt and blah blah blah. Some of this internal turmoil had to come to the forefront in this installment since it is the first time we are reading from his point of view. But at times, I felt like this Ash was completely different from the previous Ash - or at least a much more gooey-eyed, lovey-dovey version of Ash. Perhaps a large part of my problem is that the whole I-will-sacrifice-anything-and-everything-for-love thing came across as a bit much here. What Ash had to give up - in essence all of himself - is sure asking a lot. Still, the action is good, the characters are unique, and the world building truly intriguing.

Apparently there is one more novella in this series to round out the tale, and then a new series begins within the same world, starring Meghan's brother Ethan. I think I will hold off on the new series for a bit as I'm feeling rather immersed in Nevernever and getting a bit burnt out. I am going to finish up with the novella though.
Posted by Trisha at 5:00 AM