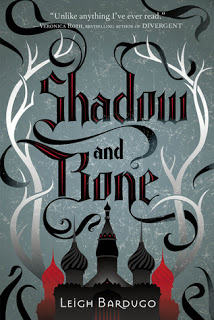 The Short and Sweet of It (from Amazon)
Surrounded by enemies, the once-great nation of Ravka has been torn in two by the Shadow Fold, a swath of near impenetrable darkness crawling with monsters who feast on human flesh. Now its fate may rest on the shoulders of one lonely refugee.

Alina Starkov has never been good at anything. But when her regiment is attacked on the Fold and her best friend is brutally injured, Alina reveals a dormant power that saves his life—a power that could be the key to setting her war-ravaged country free. Wrenched from everything she knows, Alina is whisked away to the royal court to be trained as a member of the Grisha, the magical elite led by the mysterious Darkling.

Yet nothing in this lavish world is what it seems. With darkness looming and an entire kingdom depending on her untamed power, Alina will have to confront the secrets of the Grisha…and the secrets of her heart.

A Bit of a Ramble
I bought this after reading Amanda's review over at Reading and Running, and I'm very, very glad I gave in to temptation. Except for one thing: I have to wait for-freaking-ever before book 2 comes out and then it's a whole other long wait until the third book releases. I keep forgetting how much I hate waiting. I'm an impatient little bugger I tell you.

The story is fast-paced without losing world-building or character development (although I could have used a bit more development of secondary characters) and I found the action unique. But what is really sticking out to me here is the "love triangle". As I'm sure some of you know, I find YA love triangles completely unbelievable. I am never unsure of who our heroine will choose, and I feel nothing but pity for the third wheel (or sometimes even the winning love interest as in the case of Twilight where I felt Bella really just need to be on her own until she grew up and developed some b..uh, maturity).

But back to Shadow and Bone. The not-quite-a-sort-of-maybe-a love triangle felt believable. PLOT SPOILERISH Alina loves Mal, her best friend and the person she grew up with and loved her whole life, but they have never been together. So no burning-passionate-illogical love at first sight crapola here. When she is torn from Mal, she doesn't wither into a state of non-being and pine for her lost love. She gets all sexy-sexy with the Darkling (whose bones I would have jumped). She's not playing kissy face with him to get back at Mal, nor is she experimenting or "settling" or doing anything other than what she wants. Her relationship(ish) with the Darkling has nothing to do with Mal. That's a girl. This really impressed me. END SPOILERISH

As I said earlier, I would have liked a bit more development of some characters other than Alina. I am very interested based on the teasing glimpses I get of the Darkling, Mal, Genya, Ivan, Fedyor, and even Zoya. Hopefully the next installments will dig a bit deeper into these characters.

And now I shall sit and wait impatiently for the second book Siege and Storm to come out.
Posted by Trisha at 5:00 AM