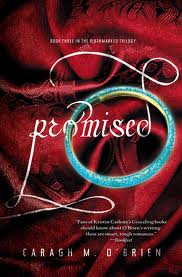 The final installment in the Birthmarked series, Promised brings Gaia stone back to the Enclave as she tries to bring three societies together and save them all.

If you haven't read the prior books in this series, be warned: spoilers ahead.

Gaia and Leon are in full-on couple mode in this one; although that is, thankfully, nowhere near the focus of the book. The inattention to romance is one of the things I most enjoyed about this series. While the second book disappointed me by throwing in a love triangle, I have to say that the uniqueness of said love triangle and the non-flowery-ness of all romantic entanglements really impressed me. Gaia and Leon's relationship is just there. They play off each other, disagree, talk about the future. They are a fact. A normal, not-all-tragic-and-dramatic, relationship.

The real focus of this installment is the melding of three cultures: the privileged inside the Enclave, the neglected outside the Enclave, and the newcomers with Gaia. Gaia wants peace, and she tries hard to negotiate with the powers that be, albeit a bit naively and impetuously. Leon and many others view outright war as the only option. The play between these two views and the ultimate decision rather fascinated me.

Now for a problem I had with the story. Some quick exposition: The Enclave has a baby problem and as such implemented a program where they took babies born to those outside the Enclave as a sort of payment for water and the such not. When that was no longer an option, they initiated a surrogacy program where women were paid to bear children for those not able to have kids inside. Surrogacy, in my opinion, is awesome. Thank whatever powers that be that there are women out there willing to do this for others. Gaia definitely does not agree with me, and she makes a big stink throughout the book about it, seemingly stuck on the issue of "how could a 'mother' give up her child like that?". While there are other issues present here, primarily that of poor women being co-opted as incubators for the rich, that is not what Gaia focuses on. Instead it is the misplaced sentimentality of a woman being heartless if she gives birth to a baby and then gives it away - even if it is to the baby's biological parents. This mentality really disturbed me.

Overall though, this is a good story and a good series. I highly recommend checking it out if you are in to dystopian YA where the romance is secondary.