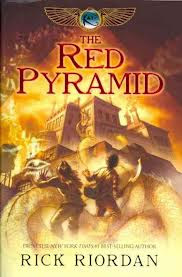 Rick Riordan's The Red Pyramid is one of those books that had been sitting on the shelves for years, and I finally picked it up back in January. I sort of ran out of time on writing a review of it then, so this is one of those reviews where I've had plenty of time to ruminate and forget.

I read this book in large part because of how much I loved the Percy Jackson series. Seriously adored it, and read it twice. So I went into this with very high expectations.

This series brings Egyptian gods to the forefront as siblings Carter and Sadie discover they are legacies in a secret society of magicians who have been dealing with the temperamental and dangerous gods for ages. When their father accidentally sets Set, the god of chaos, free, Carter and Sadie find themselves hurled pellmell into the thick of things.

Carter and Sadie take turns narrating the story, and I found their voices unique, funny, and engaging. As primary characters, they seem genuine and relatable. The complicated relationship between the two - they were raised apart after the death of their mother - was fun. Each one envies the other's life: Sadie, raised in a "normal" home, wishes she could have the adventures of Carter. And Carter, raised on the road with his Egyptologist father, wishes he could have the stability of Sadie.

The story isn't really character-based for me though; it is action-based, and the events unfold quickly. One of the things I loved was the continuous setting changes as the siblings are moved from one area of the globe to another, from the mysterious and magical to the mundane. Riordan does a good job of including numerous settings and making the reader feel that setting without getting bogged down in description and blahblah.

Altogether, I didn't enjoy this as much as the Percy Jackson books, but I think that has more to do with me than with the book itself. I love Greek mythology; I know it. Egyptian mythology, not so much. The book did, however, make me want to know more. From what I gathered from this book, the stories of the Egyptian gods are just as interesting and inter-relationally complex as the Greeks. Any suggestions for books I should read on Egyptian mythology?

Despite my ambivalent feelings about this book, I do plan on reading the rest of the series eventually. It's a good bet that my enjoyment will increase both with the series and with a bit of study.
Posted by Trisha at 5:00 AM