Just to get a post up, here are some super short reviews of books I've read since the blogging slowed to a molasses roll.... 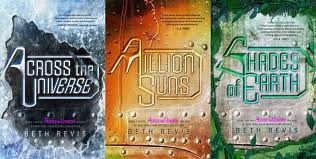 A Million Suns by Beth Revis: A bunch of uneducated, emotional decisions. Teen angst. Should have awoken some of the rest. Second half better than the first.  B

Series Review: Fast paced. More adult than I expected. Will read more by Revis. B+

Sever by Lauren DeStefano: Final in series (Reviews of Wither and Fever). Linden got a bit more worldly. Rhine still one lucky girl. Lots of closure but not overly satisfying.

World War Z by Max Brooks: Series of short reflections about World War Z. Highly emotional. Parts gave me nightmares.Thought-provoking about human nature. Has nothing to do with the movie other than title. Better than movie. A-

The Things They Carried by Tim O'Brien: Absolutely fantastic collection of semi-autobiographical, interrelated vignettes about Vietnam soldiers. Beautifully written. Metafiction. Perfect flow between chapters. Teaching it in fall. A+

I would love to say that someday I will come back and flesh out these reviews; however I can make no promises these days.
Posted by Trisha at 10:18 AM