The Inheritance Cycle by Christopher Paolini 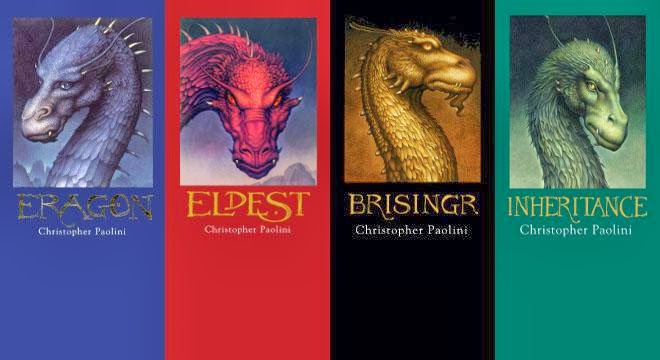 Christopher Paolini's Inheritance Cycle is one of those series where I read as follows:

I have a problem when I start a series before the final book is published; I like reading a series like watching a movie - all at once. For those times when I just can't wait to read book 1 despite the fact the final book is not yet published, well then I just read the first books over and over. That is what happened with this series as it took me ages to read the final installment. So from the middle of June to the middle of July (yeah, I'm a bit behind on reviews) I immersed myself in Paolini's world.

I want to get my frustrations out right away. The first and biggest of my problems with the series: The last two books could most definitely have been combined into one. Pointless passages abound, and not in that oh-my-god-Tolkien-describes-every-vein-on-every-leaf-on-every-tree way but more in a are-we-seriously-this-focused-on-clothes-and-fingernails? kind of way. Tolkien pulls it off; Paolini does not. And the epilogue is more about wrapping up loose ends then leaving readers with a snapshot of the future. Like 100+ pages of wrapping up loose ends. The so-so writing can be, in part, the result of Paolini's age. He wrote Eragon when he was 15, but then again, I've read "adult" writers with less skill, so age be damned.

Despite my frustrations, I did enjoy the series as a whole. I enjoy the fantasy of it, watching Eragon grow up, seeing an entire world develop. Eragon lives a simple life until he finds a mysterious egg which births a dragon. From that moment, he is slammed into the middle of a world war, a plethora of ideologies, struggles, and powers. The various races and cultures within the world are distinct and individually intriguing, something I admire in fantasy series very very much.

Will I read the series again? Probably yes. But I will definitely be skimming over those rambling passages in the last two books.